I knew it would only be a matter of time. The message I’ve been waiting to hear from a Pentecostal pulpit in Australia happened on the weekend.

Pastor Rob Buckingham from Bayside Church in Melbourne preached a message of love and acceptance for GLBT people. At the Saturday night service, the congregation gave him a standing ovation.

It is so encouraging to find those within the Christian Church who have been willing to ask to important questions. There is definitely a new climate of questioning and humility in some circles. For this, we are very grateful. The two questions many are asking are.

1. Has the church’s attitude towards the GLBT community been reflective of God’s love

2. Is it possible that the churches beliefs about same-sex-orientation been in error

Some are beginning to say No to the first question and Yes to the second.

Whilst I’ve been in dialogue with many church leaders both in Australia and overseas, I’ve often wondered who’d be the first brave person to tell the truth publically about what they really believe and shared with me privately.The message preached by Pastor Rob Buckingham, ‘Real Christianity is Accepting’ at Bayside church in Melbourne is the first I am aware of from a megachurch Pentecostal pastor.

Listen to the audio or watch the video below.

During the sermon, Ps Rob Buckingham dispelled many of the myths about gay and lesbian people and also that the Sodom and Gomorrah story has nothing to do with homosexuality as we know it today. Not only is the message a global first, the entire congregation gave him a standing ovation at the conclusion of the message. Bayside is to be congratulated for their courage in being the first to say:

“Bayside Church is a place where everyone is welcome. We believe that God loves everyone and that He sent His Son Jesus to bring salvation (through His death and resurrection) to all of humanity. A study of the life of Jesus clearly reveals His love and care towards those who are often marginalized by the rest of society. Bayside Church welcomes GLBT people to find God’s love and grace and to worship Him freely within our community.” 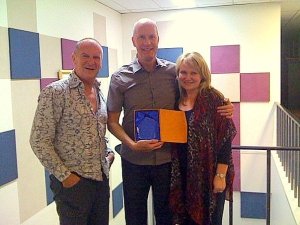 God has given Ps Rob the insight, courage and grace to create a new world for so many of God’s damaged GLBT people that will bring healing and empower others to do things better in the future. This message will literally save lives and contribute enormously to end the unnecessary suffering experienced by GLBT people who are still in churches as well as those who have left.

Sincerely from my heart Rob I want to say thank you……and on behalf of the many 1,000’s of us who have struggled to find answers to the perceived conflict between our faith and our sexuality…often in a hostile environment…….I also say thank you. It’s been great to be a part of this journey with you.

A standing ovation….is a powerful affirmation by the congregation of Pastor Rob’s message. The same thing happened to the 100 Revs who marched in the Mardi Gras parade in 2008. People stood to their feet and applauded the brave ministers who were marching to indicate they were sorry for the church’s treatment of attitude towards the GLBT community

Whilst some like to focus on the negatives and the right wing Christian extremists….we should realise that behind the scenes a quiet revolution is happening. Every now and then it surfaces as it did this weekend.

Congratulations to Ps Rob Buckingham and Bayside Church. …..and of course a thank you to those who are still in the questioning stage……how can we serve you as you seek greater understanding about our lives. First Bayside, then another church will take the step, then another, then another, till we reach the tipping point and an entire Pentecostal denomination welcomes GLBT people. My belief is that Australia will lead the way with this issue. For many of us though, it can’t come soon enough because every day we wait people suffer unnecessarily and lives are lost through suicide.