People often ask me what is the difference between welcoming, accepting and affirming churches. This little infograph will give you some idea.

Some churches refuse to go on the journey. Some began the journey, then got stuck, afraid of the potential for controversy and conflict. Others have continued to take brave steps in faith towards creating a completely affirming  congregation where the sign at the front that says ‘All welcome’ actually means that. Whist this graphic is simplistic and other terms have been used such as ‘inclusive’ and ‘reconciling’ it serves a point. It’s a journey. Some are further behind than they think. Some have a long way to go.

Two things I have learnt over the years. 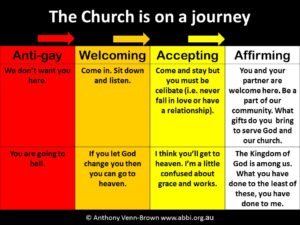 Extract from A Life of Unlearning – the Epilogue

“Whilst some Christian leaders have preached hatred and the media given oxygen to the fringe lunatics of Christendom, many others hoped if they just closed their eyes or buried their head in the sand, eventually the issue would go away. I’ve often said that the problem is not so much homophobia but subjectaphobia; they would rather just not go into the volatile space of the faith and sexuality ‘debate’. It’s such a divisive issue.

But now churches are having to come to terms with the fact that in a growing number of western countries marriage equality has or is becoming a reality. This means that gay and lesbian couples may come into their churches who have a nationally or state recognised, legal marriage. Some will be parents. They are no longer gay, lesbians or “homosexuals” they are believers, committed church members and families.

The longer churches put this issue on the back burner the further behind they become. Considering the progress made in scientific research, changes in the law, acceptance of diversity in the corporate world and that since 1973 homosexuality has not been considered a mental disorder; some churches are 40 years out of date on the issue of homosexuality. Church, you must catch up and make this a priority. Every day delayed means that LGBT people are harmed and lives lost.

If churches continue to hold on to the outdated Christian belief that homosexuality is a sin then it makes them increasingly irrelevant to those who have gay and lesbian friends, family members and work colleagues. The previous Christian labels of unnatural, perverse, evil and even abomination not only do not fit, they are offensive to LGBT people and their friends and family.

My hope and prayer is that this will be an ongoing conversation that takes ALL churches to a place where LGBT people are treated with respect and equality. Not just welcoming churches, or accepting churches but truly affirming churches.

Affirming = we love you FULL STOP.

It’s a journey we MUST go on if we profess to serve humanity with unconditional love.

It’s important to remind churches that having a conversation about us without us will usually be nothing more than a recycling of preconceived ideas and misconceptions. Imagine a group of male church leaders discussing the role of women in the church without females present? We would call that misogyny. Or church leadership discussing indigenous issues without consulting indigenous people themselves. How could they have any insight into what their life experience is really all about? We would call that white supremacy/racism/elitism. The church has done a great deal of talking about us but rarely has spoken with us. So when church leaders discuss LGBT people, relationships and the community without speaking with or spending time getting to know LGBT people it does beg the question why. What is there to fear? Why the exclusion? Is this further evidence of homophobia that is regularly denied?

It’s time for the church to invite LGBT people into the conversation. For some this is a conversation about their thoughts and beliefs but for us it is about who we are. You can ask questions.

In listening to our stories you will learn.

Over the years, I have been privileged to be a part of many of these conversations. Some have been mega-church pastors (but that’s another story). Until now, it has always been Anthony Venn-Brown knocking on the door asking ‘can we talk’. This is how the dialogue began. The day will come, and it’s not far away when churches, denominations and religious organisations will take the initiative and request ‘please come and help us, we have much to learn.’ Ambassadors & Bridge Builders International was founded to serve the church and religious organisations in these areas through seminars, workshops and consultancy. Through years of listening to the personal stories of thousands of LGBT men and women, together with many hundreds of conversations with Church pastors and leaders, I believe I have identified ten key issues, that if lovingly resolved, will build bridges of welcome, acceptance and affirmation to all men and women regardless of their sexual orientation.

To my LGBT family it is not only about them it is also about us. Homophobia and the closet are allies. Like an unhealthy co-dependent relationship they need each other to survive. One plays the victim living in fear and shame while the other plays the persecutor policing what is ‘normal’. The only way to dismantle homophobia is for every gay man and lesbian in the world to come out and live authentic lives. Once they realise how normal we are and see themselves in us….the controversy is over.”

You can read more of the bestseller A Life of Unlearning HERE.

If you’ve read down this far you must think this is important/relevant. Why don’t you share it with others now using the social media buttons? Thanks.