Sy Rogers is back in the country, speaking on Christian radio, Christian City Churches and the Hillsong Colour Conference.

Since I first published The Sy Rogers Story (An Anthony Venn-Brown Perspective) in 2007 it has become one of the top five most read articles on my site.  It’s definitely time for an update.

Sy Rogers was actually at the forefront of the ex-gay/reparative therapy (later to be known as conversion therapy or gay conversion therapy) movement globally and was particularly involved in the setting of up of Exodus here in Australia, Asia and South America. In 1990 he based himself in Singapore and established an ex-gay ministry called Choices.

I first met with Sy in 2007 when he responded to my request for a meeting. He was presenting his Sense and Sexuality seminar at Hillsong Church. When I spoke about my deep concern for young LGBT people growing up in Pentecostal and Evangelical churches, one of the things he said to me was “I no longer preach a re-orientation message” and proceeded to talk about the many years it had been since he had any involvement with Exodus International. Whilst it may have been true that he hadn’t been involved at a leadership level for some time he did speak at the Exodus Freedom Conference in Marion, Indiana only the year before.

We had agreed on confidentiality at our meeting, so I didn’t feel at liberty to share this revelation publicly. Knowing his audio and video resources were treated as the final word/authority on homosexuality I encouraged Sy via email to state his new belief publicly and clearly.  He ignored my requests except once, when he had moved his family into a new church home in Auckland, and said that it was not his preferred time to cause any public controversy.

Over the years, several minister friends have told me that Sy made the same statement to them about no longer preaching a reorientation message.  So, the question remains “why hasn’t Sy clearly and publicly stated his current belief?” (If he has done this publicly then I stand corrected.)

Considering his entire ministry has been built on the false premise that he was once gay but is now straight, Christian congregations continue to make very damaging assumptions. His messages are clouded with non-defined spiritual terminology such as sexual brokenness, same-sex attraction and transformation that is vague and far from helpful. The implications of these veiled messages harms way more than just gay and lesbian people themselves. I know Sy Rogers would not preach a completely affirming message, but to no longer say “God makes gay people straight”, is a step in the right direction. This of course also means that the term “gay Christian” is not an oxymoron.

Many people have contacted me whose lives were negatively affected by Sy’s “God can change you” message. A mid 20-year-old man told me that his parents forced him to listen to Sy Rogers tapes. He says these caused immense internal conflict which led to depression. Now he has accepted the fact that he is gay, he no longer has a relationship with his parents. they still hold on to their original position “If Sy can change so can you. You didn’t  try hard enough”.

Another, a 40-year-old man who had been involved in Exodus here in Australia for 20 years and used to promote the Sy Rogers story and resources. His words tell it all. “I was sold a very cruel lie’. One my wife and children are currently trying to painfully unravel.”

These are not isolated incidences. There have been four decades of this and it is still going on. A Pentecostal minister from the Central Coast recently said on Facebook “once gay always gay is completely unproven and a lie trapping people into something that is unchangeable….. perhaps you should review the Sy Rogers story as a means of understanding much of what my view is like”

Personally, if I knew that my outdated materials were splitting up  Christian parents and their children, creating depression, mental health issues, thoughts of and attempts to suicide, I’d be horrified and do all I could to correct that. It just needs a simple and very clear statement. At the very least a clear and simple statement. What, of course, would be far better would be a sincere and genuine apology for the decades of devastation his message “you are broken, God can heal you” has wrought in the lives of countless LGBT people.

John Smid did it. Alan Chambers did it. Randy Thomas did it.

You can share this article with others using the social media buttons below. 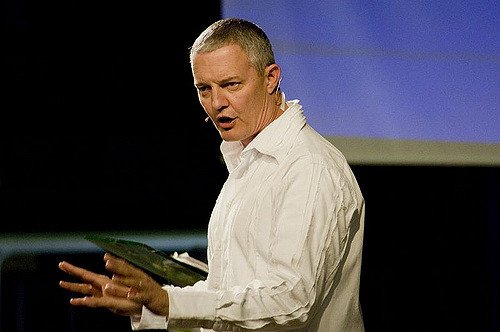