The impacts of faith/sexuality conflict 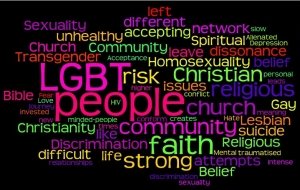 The impacts of faith/sexuality conflict

For many decades it was preached that gay people had to choose between their faith or their orientation. You are either straight and going to heaven or gay and going to hell. As more churches become accepting and affirming obviously these tragic impacts will diminish.

LGBT people of faith and religion experience the usual issues of resolving their sexuality or gender identity, coming out and learning what it means to live authentically in a predominately straight world.

They often however, experience these things with greater intensity and also have additional issues to deal with.

LGBT people of faith and religion-specific needs have not always been identified or catered for. In order to work more effectively with these target groups, it’s important for community workers, service providers and church leadership to be aware of the particular issues faced.

What are the impacts of faith/sexuality conflict?

This presentation below is a snapshot of the seminar/workshop ‘Walking Between Worlds – working effectively with LGBT people from faith backgrounds” which was given by Anthony Venn-Brown at the National LGBTI Health Conference.

Subscribe to our occasional email newsletter and keep up-to-date.