For nearly twenty years. I was a Pentecostal minister and leader in the Assemblies of God (now Australian Christian Churches). I resigned from the ministry and came out as a gay man in the early 1990s. These two life experiences give me unique insights and understanding of both the Christian world and also the LGBTQ community. It is from the latter years as an advocate for LGBTQ people and equality that I want to address the unnecessary and problematic aspects of the proposed legislation.

The proposed legislation unnecessarily complicates situations in employment, service provider settings, and the corporate environment. It creates a minefield of complexities and potentially rolls back important progress in diversity, inclusion, and equality already been made in these sectors. Others can address these various situations better than I could, but I would like to highlight the impacts on LGBTQ people specifically.

I began working with LGBTQ people from Christian backgrounds in 2000.

I set up an online Yahoo group called Exex-gay which was a support network for gay men and women who’d been a part of formal Christian “ex-gay” organisations, more commonly referred to these days as conversion “therapy”.

At its peak, the group had nearly 400 members. Until this point, I’d had no contact with fellow survivors of these programs and was unaware of how much harm had been caused.

The basis of each of these exgay/reparative/conversion “therapy” programs was the already outdated beliefs that homosexuality was unnatural, the result of poor parenting or sexual abuse and of course the religious belief that homosexuality is a sin.

From the early 1970s, these organisations had been preaching that God could heal and deliver those who were willing from homosexuality and become heterosexual.

My daily interaction with this peer support group made me realise just how devastatingly affected these individuals had been because of the beliefs and practices of these ex-gay/reparative/conversion “therapy” organisations. 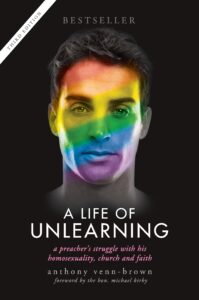 In 2004, my autobiography, A Life of Unlearning, was released. Initially published in Australia, it became a bestseller and sold out twice. A Life of Unlearning detailed my over 20 year struggle to rid myself of my homosexuality through prayer, fasting, exorcisms, a residential conversion “therapy” program and 16 years of marriage.

I believe the reason for the book’s popularity is that in certain Christian circles, I had become a well-known and popular preacher who preached regularly to congregations in the thousands in Australia’s growing megachurches. Then I just disappeared. Also, this was the first, and for a long time the only, Australian story of its kind, that had been told.

Immediately, I began receiving an avalanche of emails and letters from readers. It was not uncommon for the correspondence to begin with the words “I have never written to an author before, but your story is my story”.

For the rest of the email, sometimes many pages long, the reader poured out their hearts about their experience of years of inner turmoil, discrimination, and rejection by their churches, Christian friends and/or family. Most people had never shared these things with anyone before. They’d never come across anyone who would understand or could relate. My story had triggered their buried pain, shame and trauma.

From these interactions, it wasn’t long before patterns of harm became obvious. I created an excel spreadsheet of the stories with a dozen columns of harmful outcomes and noted when each individual experienced mental health issues, thoughts of suicide, suicide attempts, and was experiencing long-term impacts, to name a few. It wasn’t uncommon for a person to have ticks in several columns.

Soon after this, I co-founded Freedom2b, which was a support network for LGBTQ from Christian backgrounds, particularly from Pentecostal, Evangelical and Charismatic backgrounds. Three hundred and fifty people of the 1,600 members posted their stories on our forum . Once again, the same patterns of harm and tragic outcomes were blatantly obvious.

It didn’t matter if they had been involved in formal conversion “therapy” organisations or informal counselling with pastors or church leaders in local congregations; the outcomes were identical. Or even being a part of a Christian family that clearly communicated an openly gay or trans child was in total conflict with their Christian faith and would never, ever be tolerated or accepted, had the same outcomes.

After six years running Freedom2b and working with these individuals in Australia, I founded Ambassadors & Bridge Builders International (ABBI). We work on overcoming ignorance and misinformation about sexual orientation and gender identity within religious contexts through consultation, workshops, seminars and dialogue. Even though this has meant focusing on a different level, the one-on-one contact with individuals experiencing faith and sexuality/gender identity conflict has continued.

To summarise my last 20 years of experience, I have estimated that I have worked with around 4,000 individual survivors of formal conversion “therapy”. Separate from this, the number of people who have experienced faith and sexuality/gender identity conflict I have worked with is incalculable. The outcomes have remained the same, including mental health issues, depression, suicidal tendencies, and attempts.

Of course, even more tragic is the loss of lives through suicide; often young people gone in their prime, leaving family and friends devastated. The mental health and suicide impacts on LGBTQ people in Australia are disturbing and multiplied many times more than the general population.

As I have been pointing out for years , if you are an LGBTQ person from a faith background, the risks are multiplied once more because of several factors. It’s impossible for us to count the cost of religious LGBTQ suicide.

And what is the source of all this trauma and unnecessary suffering? Churches, religious institutions, Christian leaders and family members where rejection of science, misinterpretation of sacred texts and cultural biases have pre-eminence.

Considering the tragic impacts that religion and religious individuals have had on the lives of LGBTQ people, do we want to further protect them legislatively from creating more tragedy, trauma, and harm?

This Religious Discrimination Bill is a definite step backwards. If passed, this Bill will unleash unnecessary adversarial conflicts and disharmony which I know we will all come to regret. Should you require any additional information or clarity, I am happy to assist.

Anthony Venn-Brown OAM
Founder and CEO of Ambassadors & Bridge Builders International (ABBI)
Author of the bestseller ‘A Life of Unlearning – a preacher’s struggle with his homosexuality, church and faith‘
Honoured to be voted one of the 25 Most Influential Gay & Lesbian Australians (2007 & 2009)
Winner of 2015 ACON’s Health and Wellbeing Award and awarded the Medal of the Order of Australia for service to the LGBTIQ community (2020). 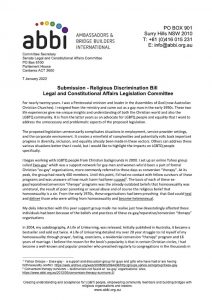