Home/Church, Event/Sacred Texts and LGBTQ – an interfaith trialogue
Previous Next 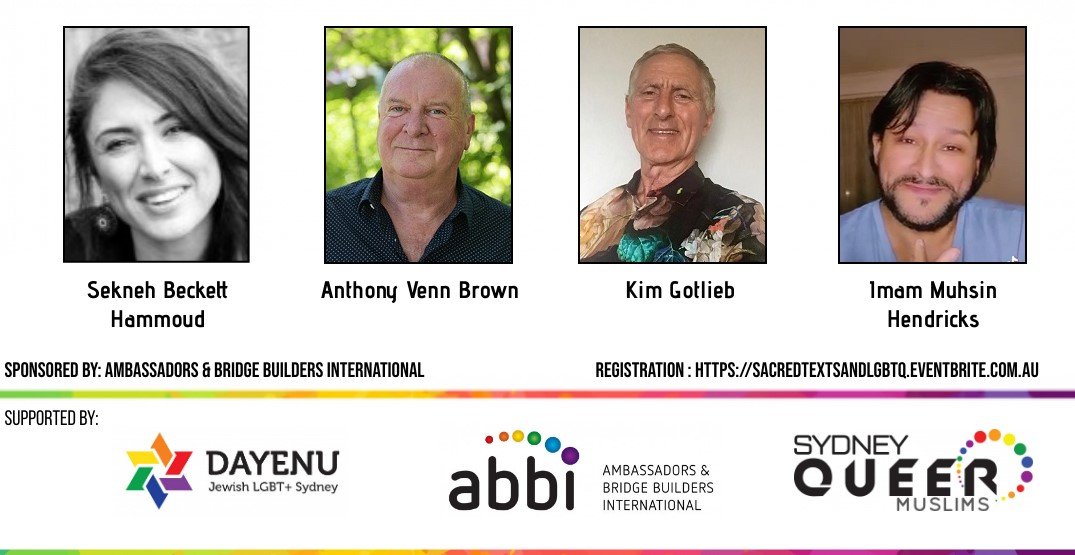 In a former life, Anthony Venn-Brown was a high-profile Pentecostal preacher. Anthony’s bestselling autobiography, ‘A Life of Unlearning’, revealed his 22-year struggle through gay conversion “therapy”, exorcisms and marriage trying NOT to be gay. ‘A Life of Unlearning’ opened a floodgate of responses from readers with similar experiences and since 2000, Anthony has worked extensively with people experiencing faith/sexuality conflict and survivors of LGBTQ conversion practices. He is the founder and CEO of Ambassadors & Bridge Builders International which provides resources and training in both religious and LGBTIQ circles. In 2020, Anthony received the Order of Australia Medal (OAM) for service to the LGBTIQ community.

Kim Gotlieb’s skillset span from Psychotherapist to Bar Mitzvah teacher with some social activism, Stand-up comedy and Radical Faerie characteristics along the way. He is an active member of Emanuel Synagogue, and studies Jewish Renewal and Kabbalah with teachers in the States. He is currently Vice President of Dayenu – Sydney’s Jewish LGBTIQA+ Group, having been involved since 2000. He has a Masters in Critical Psychology & Graduate Diploma in Social Ecology. Kim has been involved with Interfaith activities at the Parliament of World Religions and LGBTIQA+ Interfaith services. He enjoys walks along the beach, 5 Rhythms movement & Thai food.

Muhsin Hendricks is an Islamic Scholar with a background in Classical Arabic and Islamic Sciences obtained at the Jamia Dirasat al Islamiyyah), Karachi Pakistan (1990-1994). He is an Imam (religious leader) by profession and also a human rights activist focusing on sexual orientation and gender identity within Islam. He has done independent research on Islam and sexual diversity, an area that does not often get explored in the Muslim world. He has also designed and facilitated many workshops / trainings on Islam, sexual orientation and gender identity.

Muhsin Hendricks also holds a Diploma in Counselling and Communication obtained through the South African College of Applied Psychology and often use his Islamic training in conjunction with his counselling and coaching skills. Muhsin Hendricks is the first openly queer Imam in the world.

Sekneh Hammoud-Beckett is a Narrative Therapist and Registered Psychologist (MAPS) based in Sydney. For over a decade she was employed with the New South Wales Department of Health (Youth Mental Health) engaging in health promotion and therapeutic services for young people and their families. She also worked as a researcher with the Division of General Practitioners and a Consultant Psychologist for Twenty10, a NSW community service for young people and their families navigating diverse identities.

Sekneh has papers published, received media and parliamentary attention for innovating an alternative concept to the coming-out discourse. She presents both nationally and internationally exploring the relationship between sexuality, religiosity, gendered violence and racism. Currently, Sekneh works in private practice providing therapy, consultancy, teaching, and supervision and is engaged in community advocacy roles.