Boy Erased – a review and after film panel

Home/Conversion therapy, Review/Boy Erased – a review and after film panel
Previous Next

Boy Erased – a review and after film panel

I’ve seen Boy Erased three times now. Actually, once is enough. It is not the kind of movie you want to see over and over again like Beaches, Cabaret, Star Wars, or whatever your all-time favourite movie might be.

Boy Erased is a dramatization of Garrard Conley’s 2016 memoir of the same title, written for the screen and directed by Joel Edgerton.

Garrard becomes 19 year old Jared (Lucas Hedges) in the movie. Jared’s father, Marshall, (Russell Crowe) is a Baptist pastor who subsidizes his ministry with a car dealership he intends his son to take over one day. His mother, Nancy, (Nicole Kidman), the dutiful, devout, Christian mother and wife. They live in the ‘Bible Belt’.

Marshall and Nancy appear to be your run of the mill Baptists. Not overtly political or anti-gay, placard-carrying activists, but clean-living, God-fearing, bible-believing Christians. It’s a scenario that is the same in countless evangelical, pentecostal households, not just in the Bible Belt in America, but across the world. Some will one day, like Jared’s parents, discover their child is gay, lesbian or transgender.

Like so many of us in our early and mid-teens, sexual encounters with members of the same sex bring us to the realisation we are gay. This happens for Jared. Whilst for some this realisation has it challenges, for someone like Jared, it is catastrophic. ‘Gay’ means abomination, sin, evil, and unless changed, an eternal separation from God and his family.

Jared is torn; acceptance and love have been the foundation of his life in his family, church and community. He loves his Dad and Mom, and even though it is not overly clear in the movie, he also loves God, and is willing to find the ‘fix’ that will deal with this ‘problem’.

Jared is in the introductory intake of Love in Action (LIA); several weeks to decide if he wants to commit to the full-time live-in program. I was told it would take about two years to turn me from gay to straight and I believe the LIA program was similar. Any conversion therapy survivor will tell you the gay to straight commitment is one of years, if not decades.

For those of us who have experienced gay conversion therapy there are some chilling moments. But there are also so many levels where others can be touched and relate. The family dynamics, the conversations, the emotions are also known by many LGBTI people with no faith background.

Kidman, Crowe and Hedges play very believable roles; almost understated. Maybe a little too understated for Jared. The internal conflict for those of us from strongly bible-based churches is horrifying. The intensity has driven many of us to consider ending our own lives. Many have. Not everyone had an understanding Christian mom like Nancy to rescue them.

Trigger warnings should be on the film. I have an understanding of my own triggers and how best to manage my PTSD, so I was able to get through the movie several times; but not without incident. Watching every traumatic experience you’ve had, portrayed on the screen in front of you, for 114 minutes is challenging. The first time I saw ‘Save Me’, a movie about an ‘ex-gay’ residential program, I was devastated.  Others might not be aware of how deeply they will be impacted or re-traumatized. Go with friends. Debrief afterwards.

It would be easy for some to try and discredit the movie as something that happened in 2004, no longer relevant and a Hollywood beat up; indeed some are already. Whilst there might be the occasional dramatization, ask any conversion therapy survivor how close it is to the truth. Most will confirm what it’s like, others will say it’s worse.

Is it relevant today? Totally!!! For years now, at least since 2009, I’ve been endeavouring to make people aware the problem was not the programs or organisations but the belief system that created them. The programs like LIA and organisations like the now defunct Exodus, are the symptom not the cause. The root of the LIA program was the belief that homosexuality is unnatural, against God’s divine order and caused by something dysfunctional in your past. Does that belief still exist in some parts of Christianity? Again, totally!!!! Our recent discussions about whether Christian schools have the right to expel gay students and sack gay teachers demonstrates that. But there is more happening behind the scenes than most people realise. Boy Erased will help raise awareness about this.

Should you see the movie? Yes!!! Take someone with you who needs some education about the struggles many LGBT people experience in their lives; particularly in the area of religion. They’ll be enlightened.

Want to know more about conversion therapy in Australia? You can read our report HERE.

SPOILER ALERT. Mr Sykes, the LIA director, is a friend of mine. John Smid resigned from LIA in 2008. We worked together in 2012. During my recent 3 month research trip for ‘The Quest to Cure Queers’, I stayed with John and his husband Larry in Texas for 4 days. If you want to know more about what he feels now, you can read that on his blog Grace Rivers or read his book, Ex’d Out. On the research trip I also spent three hours interviewing the founder of LIA in San Francisco who hasn’t shifted at all from his position in 1973.  More about that in The Quest to Cure Queers.

After the Queer Screen preview Sunday night at the Events Cinema in Sydney there was a panel interview with myself, fellow survivor and activist Chris Csabs and LGBTI advocate Rev Mike Hercock.

Thanks also to Monique Shafter from the ABC for interviewing the panel. 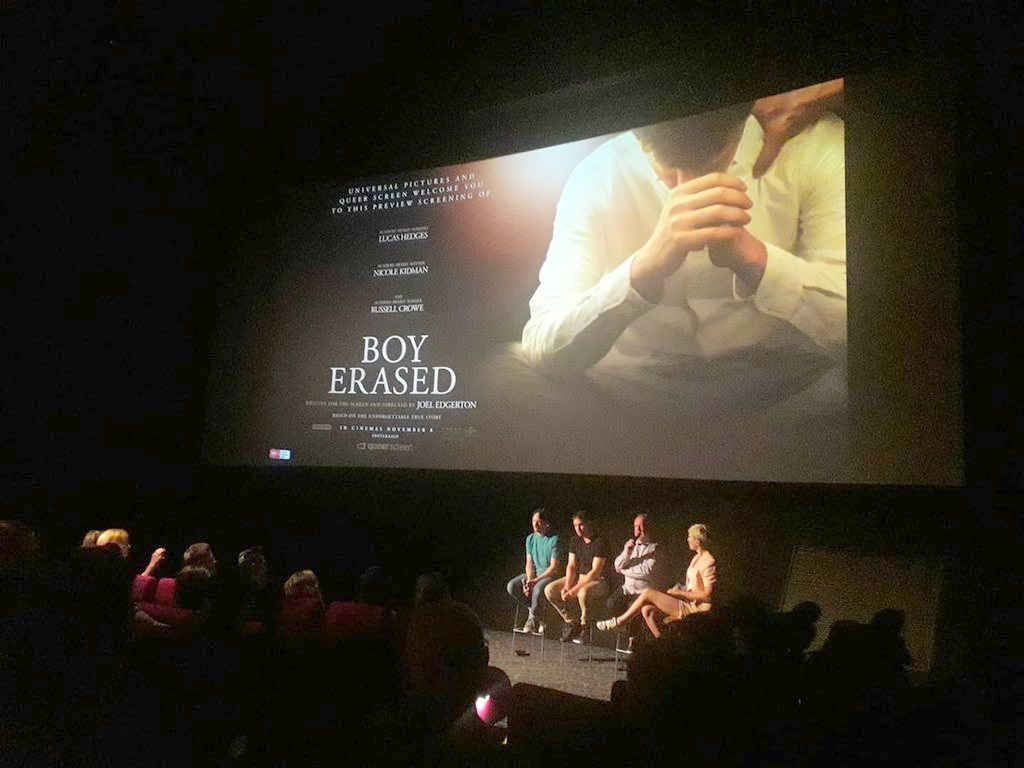