Fear is a powerful force. Ask any gay or lesbian person. Fear kept many of us locked in closets for years. Marketers know how powerful fear is as a motivator that can sell virtually anything including  tires,  insurance, even breakfast cereal and deodorant. We purchase  things that previously were considered unnecessary: antibacterial soap, alarm systems, vitamins and so on. And it’s all because we have been convinced that purchasing the particular product will resolve an outcome we fear.

It doesn’t take a lot of analysis to realise that the entire marriage equality No Campaign is based on fear. Every leader within the No Campaign is ‘on message’.

As soon as the postal survey was announced Tony Abbott was out the front of Parliament House warning Australians this wasn’t about same-sex marriage. ‘If you are worried about religious freedom and freedom of speech, vote No.’ he told reporters repeatedly.

The Australian Christian Lobby’s Lyle Shelton, along with the Marriage Alliance ramped it up further. Apparently it wasn’t just about losing freedoms as Abbott said, but it was about a long term, insidious conspiracy to restructure society itself and make school children genderless.

Sadly not everyone will read Benjamin Laws in-depth investigation, ‘Moral Panic 101: Equality, Acceptance and the Safe Schools Scandal’ to get ALL the facts. Benjamin Law has read every single word of the Australian newspaper’s 90,000-word coverage against LGBTIQ-focused anti-bullying resource the Safe Schools Coalition Australia.  Not only were the articles NOT based on fact, many were intentionally deceptive. If you do invest the time reading Law’s essay, you’ll see how the topic of the anti-bullying program became certain publications click bait for months on end and kept some journalists in work, during times of staff cut backs.

The Marriage Alliance TV advertisements implant the irrational fears. Parents with troubled looks on the faces tell lies about what happened to their children in schools.  You’d better watch out, you’d better vote No, they warn in sombre tones with worried looks and music to match.

What not many realise however, is that this religious scaremongering is decades, even centuries old. It raises its ugly head every time society has evolved to be more egalitarian. 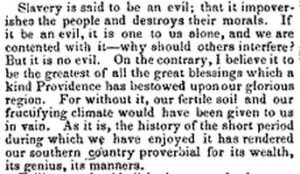 In 1856 Reverend Thomas Stringfellow, a Baptist minister in Virginia wrote ‘A Scriptural View of Slavery’.

‘Jesus Christ recognized this institution as one that was lawful among men, and regulated its relative duties… I affirm then, first (and no man denies) that Jesus Christ has not abolished slavery by a prohibitory command; and second, I affirm, he has introduced no new moral principle which can work its destruction…’

It’s in the Bible. It’s God’s order. Don’t tamper with it. Sound familiar?

When the concept of voting rights for women was being introduced, who opposed it and on what grounds?

‘Who demand the ballot for woman? They are not the lovers of God, nor are they believers in Christ, as a class. There may be exceptions, but the majority prefer an infidel’s cheer to the favour of God and the love of the Christian community. It is because of this tendency that the majority of those who contend for the ballot for woman cut loose from the legislation of Heaven, from the enjoyments of home, and drift to infidelity and ruin.’ — Justin Fulton, pastor of the Union Temple Baptist Church in Boston, 1869. Woman as God made her : the true woman

Yes. Women are inferior to men. Don’t mess with that Divine Order. Society as we know it will be destroyed. Sound familiar?

Interracial marriages were illegal in the United States. Once that was challenged what arguments were used to maintain the inequality? 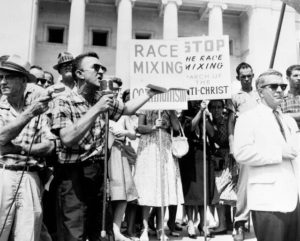 ‘Almighty God created the races white, black, yellow, malay and red, and he placed them on separate continents. And but for the interference with his arrangement there would be no cause for such marriages.’  — Statement by Virginia trial judge in 1959.

‘The laws of civilization demand that the races be kept apart in this country. The progress of either does not depend upon an admixture of blood. A sound philanthropy, looking to the public peace and the happiness of both races, would regard any effort to intermerge the individuality of the races as a calamity full of the saddest and gloomiest portent to the generations that are to come after us.’ Tennessee: Doc. Lonas v. Stare, 50 Tenn. 287, 310—11; 1871

Feel the fear? ‘calamity full of the saddest and gloomiest portent to the generations that are to come after us.’

Finally, during the civil rights battle to end discrimination and segregation, it was the same thing again. 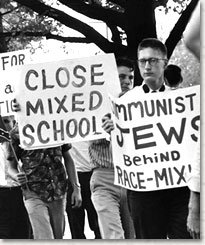 ‘When you run into conflict with God’s established order racially, you have trouble. You do not produce harmony. You produce destruction and trouble, and this nation is in the greatest danger it has ever been in in its history. …..The darkest day the world has ever known will be when we have one world like they are talking about now. The line will be rubbed out, and the Antichrist will take over and sit down on the throne and rule the world for a little while; and there will be judgment and the cataclysmic curses found in the book of Revelation. We are going to face all this. May God help us to see it and to be true and faithful to Him.‘ Rev Bob Jones radio address “Is Segregation Scriptural?” 1960.

Equality. It was always about equality, as it is in the current marriage debate.

It’s about creating a fair and equal Australia.

Just  like the scaremongerers of the past, the No Campaign sincerely believe their alarmist message. But thankfully, the misguided sincerity of the naysayers failed to hold back the progress of the more enlightened societies we enjoy. Why the No Campaign is using fear is another article in itself. Suffice to say that institutions only rise when they feel threatened.

In essence, the two campaigns have distinctly two different motivations. One is fear and the other love and equality.

Don’t get confused by the smokescreens. All you need to ask yourself is which  of those two makes Australia a better place.

You need to share this now. Use the buttons below.