GAY LIFESTYLE – What is the gay lifestyle?

Home/General, LGBTI/GAY LIFESTYLE – What is the gay lifestyle?
Previous Next

GAY LIFESTYLE – What is the gay lifestyle?

The term gay lifestyle is frequently used in Christian circles. Apparently straight people have ‘lives’ but gay people have ‘lifestyles’. Most people who use the term don’t realise just how offensive it is to the majority of LGBTI (lesbian, gay, bisexual, transgender, intersex) people.

‘Hillsong Church welcomes ALL people but does not affirm all lifestyles. Put clearly, we do not affirm a gay lifestyle and because of this we do not knowingly have actively gay people in positions of leadership, either paid or unpaid.’ Brian Houston.

Here’s just a couple of comments from our Facebook page

Sera Kobiti: …signs of the last days……living a lifestyle of gay and lesbian……you are already a walking dead, fueling the logs in hell where you will eventually end up…..because you already know the truth and the truth should have set you free, not add onto your problems!!

Robin Herms Diamaduros: We don’t hate LGBT (they do us however) but THAT LIFESTYLE IS A SIN!!!! No more or less than adultery or sex before marriage but IT IS A SIN & to not call it so is denying God’s word. I don’t know of anyone who would oppose a gay person coming to church, we would not say lifestyle is okay but we would still love them.

If the internet had been around in the late 1970’s we would have seen the term introduced and spiked in usage like a sky rocket …..thanks the anti-gay campaigner Anita Bryant.

In her book 1977 book ‘The Anita Bryant Story’ she wrote.

‘The legitimate minority groups protested against homosexuals waving the flag of human rights. They called homosexuality by its right name – a perverted, unnatural and ungodly lifestyle.’

When the term ‘gay lifestyle’ is used, people are using it to refer to a life of self-destructive behaviours, partying and meaningless sexual encounters. And the ‘gay lifestyle’ happens in a particular geographical area known as the ‘gay ghetto’.

Considering that this ‘lifestyle’ is

The term ‘gay lifestyle’, at the very least is a false assumption and at its worst condemning, prejudiced stereotyping.

Some people obviously have no idea that the majority of gay and lesbian people never venture into the ‘gay ghettos’, are embarrassed by some of the stereotypes and behaviours. They lead such normal lives…. they consider themselves almost boring.

I often use the analogy of the iceberg. We have two very separate things 1. The tip of the iceberg – the ‘gay scene’ (10%). This is often the only thing people see as it is visible and promoted in the media. 2. Underneath the water though, 90% of the iceberg is unseen. This represents the larger portion of the LGBTI community; people who are not as visible because they live ‘normal’ lives at work and with their partners or family in the suburbs.

On a side note, the incorrect use of this term ‘gay lifestyle’ has been a contributing factor to many a Christian young person’s demise. For example, if I am a young gay man in a church and all I’ve ever heard about is the ‘gay lifestyle’…..then …if I feel I must be honest about my sexual orientation, I’ve been conditioned to think there is only one way to express that…..so what do I do…..head off the nearest ‘gay ghetto’ and begin to live the ‘gay lifestyle’. The church’s lack of knowledge about our community has contributed to the self destructive lifestyles and even HIV infection of some who have left or been rejected from their church communities.

When people use the term ‘gay lifestyle’ it only reflects their ignorance about the reality of the everyday lives of LGBTI people. Those who actually have gay friends and family members know different however. Instead of standing afar and pointing fingers judgmentally they are actually an important part of our lives.

Need to educate some people about the term ‘gay lifestyle’? Use the buttons below to share on social media. 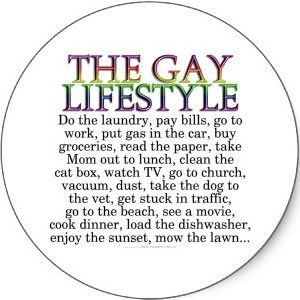