Operating in 119 countries, and reaching  58  million people the YMCA covers a wide variety of cultures, political and religious beliefs. The YMCA exists in countries where being LGBT is opposed and carries prison sentences. The life for many of our LGBT family in these places is one of discrimination and fear.

Many Christian organisations have been challenged by the growing acceptance of LGBT. Not all have handled this well and have fractured over the issue.

Some more progressive countries within the YMCA global network began pushing for LGBT acceptance across the entire organisation. Johan Vilhelm Eltvik, the Secretary General of YMCA International, had been a strong supporter of LGBT-rights inside Christian organisations and churches since 1990. Having observed how public debates had fragmented other global Christian organisations, he was looking for a more constructive process.

Ambassadors & Bridge Builders International (ABBI) was contacted to help the organisation find a way to move forward on LGBT acceptance and minimize the potential for a split in the organisation.

In November 2015, the YMCA invited a microcosm of the organisation (12 representatives from several African countries, Asia, Europe, South America, USA, Canada) for me to work with over several days in the Czech Republic.  It was challenging working with people whose religious beliefs said homosexuality is a sin, their countries imprisoned gay people and in their cultures it is even offensive to speak of in public. 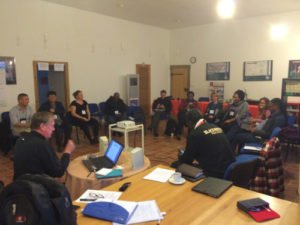 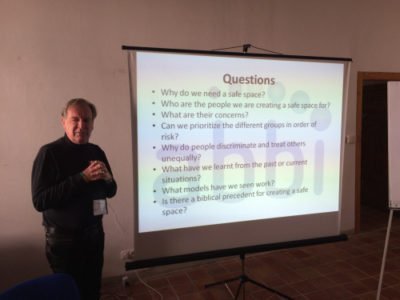 During that time, we developed ‘safe space’ principles to help move them along the journey to greater understanding and acceptance. It was a genuine honour to work with each of the individuals and assist them on the beginning of the journey. You can read Johan Vilhelm Eltvik, the Secretary General’s, report on his blog.

As with the vast majority of the work we do, this work was completely confidential so the conversation not highjacked by conservative trouble makers.

This email came from Johan the Secretary General of YMCA International

I thought you deserved to be the first to know. The new inclusion statement from Safe Space was agreed almost unanimously by the ExCom of the World Alliance of YMCAs, only against 1 single, lonely vote.

It welcomes people of any minority background, sexual minorities spelled out like that. It is a great victory, a breakthrough of dimensions, because it includes all those countries were LGBT is illegal.

They can decide to take the issues to a Safe Space process, if they are not ready to embrace the statement now. But they cannot stop it. It is the official value statement of the World YMCA.

I have a lot to thank you for. You should see your vital contribution to this and rate it as one of your great contributions to LGBT and the Christian communities. You opened a lot of doors and hearts and made this outcome possible.

The new inclusion statement Johan is referring to is

Diversity around the globe was accepted in the founding document of the World Alliance of YMCAs in 1855, where it is stated that no issues, however important they may be, shall divide the YMCA. The focus is on unity in Christ – “that they all may be one.”

Therefore – diversity and inclusion are core to the YMCA movement.

Therefore – the YMCA movement is open and inclusive of all people regardless of their ability, age, culture, ethnicity, gender, race, religion, sexual orientation and socio-economic background.

However, we admit that we are not perfect in demonstrating God’s unconditional love, and that it is an ongoing process to become fully inclusive in order to improve our service to humanity.

Therefore the YMCA movement must strive courageously against any discriminatory behaviour and will always abide by the UN Human Rights Declaration.

Chad Nico Hiu,  Director, Diversity & Inclusion,  YMCA OF THE USA and one of the participants in the safe space working group group wrote:

‘Anthony is one of the most effective, compassionate and strategic facilitators in the world around conversations related to faith, diversity, equity and inclusion – especially related to LGBTQ identifies individuals and communities. He was able to lay a foundation of safety, non-judgement and empathy at a table filled with YMCA leaders from around the world on one of the most challenging topics our global movement faces. This made possible an historic step forward towards inclusion for all across the World YMCA movement.’