It’s been an emotional morning. I find myself moving in and out of tears today as I think of the horror of over 50 people massacred in the Orlando gay nightclub, Pulse. And with so many shocking injuries, the death toll could rise.

Our gay venues have been places of safety, refuge and celebration. These were created and exist for a reason. They were birthed in an era when being gay was a criminal offense and considered a mental illness. We had to hide, not only to exist but to survive. Gay men and women needed a place where they could connect, feel safe and be themselves, away from the hatred and oppression. Many of us still remember the days of fear when there was no equality or freedom.

Even in Pride Month, the tragic events of the last 24 hours remind us that violence towards LGBTI people continues and is fuelled by ignorance, prejudice and bigotry. A bullet brings a quick and final end to a life but Christian conservatives and right wing politicians fire constant verbal missiles at LGBTI individuals, our community and our relationships. The ignorance, prejudice and bigotry are the same. 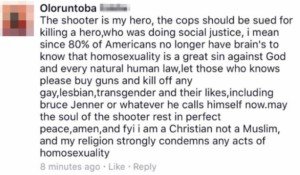 In Pulse nightclub, where so many lives have been cut short and others injured, I think of each of them. The young person who recently came out to their parents and was enjoying their first Pride with friends. The guy considering asking his partner to marry him now same sex marriage was legal or making preparations for their wedding. It was Latin night at Pulse and knowing how strong Catholicism and Pentecostalism are in South America, I wonder how many had not been able to come out to the religious parents believing they would be rejected not accepted. What tragedies.

In the midst of this horror, we must remember to never underestimate the strength and resilience of the LGBTI spirit.

We’ve been attacked, brutalized and bashed, humiliated and abused. imprisoned, hung, murdered, thrown off buildings and cliffs, excluded from churches, rejected by Christian friends and family, institutionalized, lobotomized, treated as pariahs, denied basic rights, ……….AND YET WE SURVIVE.

Orlando is a shocking reminder that our battle for basic human rights such as respect, freedom, dignity, safety and equality is not over.

These precious 49 lives, taken so suddenly and violently, will not be lost in vain.