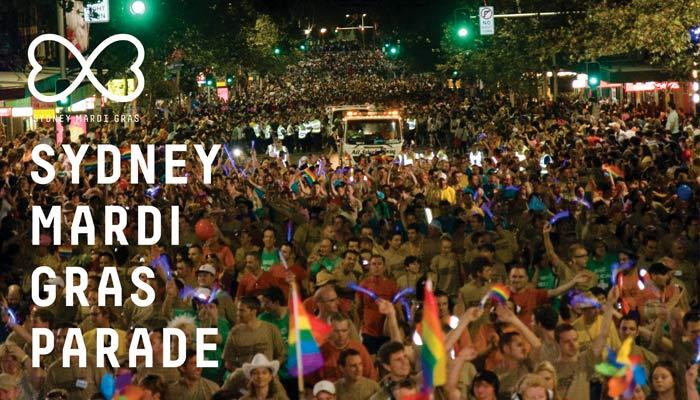 Some reading this weren’t even born in 1978 when Mardi Gras was birthed amidst protest and police brutality. The first Mardi Gras and subsequent marches highlighted the inequalities and discrimination that LGBTI people live with daily. Considering the raft of laws now changed and introduced, are pride parades such as Mardi Gras still relevant?

Opposition to the parade is predictable from some circles. Rev Fred Nile comes to mind immediately. Since the mid 1980’s he has consistently spoken against the parade calling it a “public parade of immorality and blasphemy.” In 2010, his younger protégé, Peter Madden, took up the charge trying to close down the parade by making outrageous statements such as “100.000’s of drunken youth will come to Sydney streets and be incited to all kinds of lust, filth and moral depravity,” “Mardi Gras is Sydney’s high day of sexual immorality.” Peter Madden has drifted off into oblivion whilst Mardi Gras remains a premier Sydney event.

Each year Rev Nile asks Christians to join him and pray for rain. He’s surprisingly silent when we are given a glorious end of summer evening or the rain stops just before the parade begins. Should the weather align with his invocations then he’s quick to remind us all he has a direct line to the Almighty.

But it’s not only Christian right-wingers opposing the parade. Not all gays are happy either.

Often controversial gay author and former columnist for Manhunt, Michael Alvear, has been reported as saying:

“Pride marches went over the cliff a few years ago when we decided all that crap about rights and equality was cutting into our partying. In the early years going to pride was an admirable, courageous act, the equivalent of going on a fire-walk. Today, Pride marches are more like freak shows than rites of passage. And bad ones at that.” “they tear down everything we work for (we act out every offensive stereotype we spent the past year trying to break down).”

Mardi Gras will always be relevant because…..

I’ve lost count how many times I’ve been in the parade but I’ll never forget my first in 1995. Memories like that stay with you forever. I wrote about the experience in my autobiography A Life of Unlearning

Deciding to march in the 1995 Mardi Gras Parade was my opportunity to extinguish any last fears I had regarding people’s reaction to me being gay, knowing the parade would be seen by a live crowd of over 750,000 and a viewing audience in the millions on national television. After failing two auditions (just couldn’t get that five, six, seven, and eight! thing right) I saw an announcement on the noticeboard at the gym: ‘Guys wanted to form a group called “Locker Room Boys”’. I knew at this late stage they would be more willing to take someone who lacked co-ordination.

For three hours every night for ten days our group of sixty guys rehearsed the dance routine to the Village People’s ‘YMCA’. Everyone worked hard to look fantastic; bodies were gym-toned, tanned and waxed. The two guys on either side of me were also marching for the first time. Mark, a striking, successful travel consultant on the left, and Anthony, a slim redhead and academic on my right, soon became friends. The combination of working with the unemployed and teaching sales, then rehearsals, and working out at the gym afterwards took me to near exhaustion point.

The excitement was palpable as we gathered with the thousands of participants making up the two hundred floats and groups in the parade. It was a cold night, rain threatened and once again Rev Fred Nile had encouraged Christians to pray for God to rain on our parade. It had been raining on and off all day but as it got closer to the parade’s starting time, the rain stopped. Either God wasn’t listening to them or He was on our side. The group in front moved off and the Locker Room Boys moved into position. The exhilaration as we marched into the crowds in Oxford Street was incredible. We repeated the dance routine nearly sixty times during the two-kilometre length of the parade and the crowd went wild when we’d throw off our towels to reveal our white Calvin Klein’s.

Becky, my daughter, now nineteen, was somewhere in the crowd watching her first Mardi Gras Parade but I knew it would be almost impossible to see her among the crowds twelve deep along each side of the road. When not having to concentrate on the dance steps, my eyes scanned the crowd looking for her familiar face. Then at the halfway point as we turned at Taylor Square into Flinders Street for the last stretch, I saw her in the crowd. Her face beamed; she was totally distracted by the overwhelming variety of things vying for her attention. Suddenly she saw me and threw caution to the wind. She jumped the barricade, pushed past the marshals and ran out to me.

‘There’s my Dad, there’s my Dad!’ I could hear her scream above the Village People booming from the speakers on the truck in front of us. We ran into each other’s arms like a scene from some old time movie and hugged over and over again in front of all those people. The emotion was overwhelming and with tears streaming down our faces, she said, ‘Dad, I’m proud of you. I’m sooooo proud of you. I love you.’ I was proud of her that she was proud of me and thought that at last my little girl’s broken heart was healed. No one in the crowd would have known why we cried and danced or been aware of the pain we’d both gone through and the price we’d paid to arrive at that point where pride had replaced shame. My pain had become her pain but she’d continued to love me through confusion, humiliation and embarrassment.

Suddenly I realised that we were holding up the whole parade and the marshals were yelling ‘move on’, so I ran up the street to catch up with the group and jumped back into the routine.

Neither of us will ever forget that moment.

Every parade will have its first-timers. It isn’t just young people either. There are people of all ages, who because of family, culture, geography or religion have only recently found the courage to come out of their prison of shame and fear to proudly stand in the light.

New frontiers of acceptance and equality are showcased every year.

Not a single 78’er could ever have imagined the impact that first protest march would have or the breadth of its influence. They were just trying to change the laws that criminalized gay and lesbian people. I’ve often been moved to tears when I’ve seen a group appear in the parade for the first time. Like the people with disabilities in wheelchairs, the gay and lesbian Mums and Dads pushing their kids in strollers, school students against homophobia, the police in uniform, defence force personnel, LGBT people of various religions and ethnicities. Each group demonstrating another wall of ignorance is crumbling.

The first time Freedom2b marched was a particularly moving experience you can read about here A Divine Moment in the Mardi Gras Parade. I remember vividly seeing a young man in the crowd who broke into tears when he read our sign GAY PENTECOSTALS. I ran over to him and said “happy Mardi Gras.” Over all the shouting and screaming he said “You don’t know what it means seeing you in the parade. My father is a Pentecostal minister and he disowned me when I told him I was gay.” The following year 100 evangelical, mainline and few Pentecostal ministers signed an apology to the LGBT community and some of them march in the parade under the banner of the 100 REVS.

You can’t beat the live experience. Every time I encounter someone, gay or straight, critical of the parade, I ask them the question “have you ever actually seen the parade?”. The reply is often yes but when challenged further its either been TV reports or images in a newspaper. “Come with me once” I reply. For those that took the challenge, pre-conceived ideas and misconceptions melted away, as they realised, firsthand, what the night is really all about. A night of celebration…and so much more.

Participating in the parade can be a transformative, spiritual experience.

Year after year I led the group of LGBT people from Christian backgrounds, Freedom2b, and every time I’d always remind the first-times “The person you are at the end of this parade will be very different to the person you were at the beginning. As you step into Oxford Street, and you hear the roar of the crowd cheering you on, tingles will run up and down your spine. With each step you take, the very last traces of internalised homophobia, fear and shame will be dislodged from the inner recesses of your subconscious.”

Remember, Mardi Gras and Pride parades were not born out of a need to celebrate being gay. They evolved out of our need as human beings to break free of oppression and to exist without being criminalized, pathologized or persecuted.

And considering the recent controversies over Gayby Baby, the Safe Schools program and marriage equality, there was never a more important time for every single LGBTI person, their friends, family and work colleagues to be out and proud.