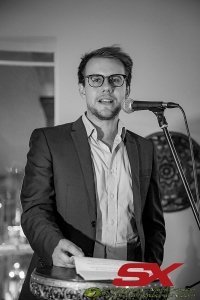 I have always been quite different.

Cut to 1989 – I am 5. And I’m locked in my mother’s closet. Mum rushes in. I’m slowly twirling in a flowing blue – floor length – gingham dress. We all look back on that moment and we wonder – just wonder why Mum (and I for that matter) were so surprised some 15 years later.

Like many of us. I was always the ‘different’ kid in the group. I felt misunderstood for the entire length of my childhood and teenage years.

I had learnt early on that WHO I truly was – was different, odd, maybe even wrong and something to hide or at the very least keep on an ultra low simmer.

In 1997 a very sheltered – shaved head – naive boy walked through the gates of Crestwood High School to start Year 7. Throughout school I tried to be normal and kept myself safe in the library, in the visual arts room or in a musical rehearsal. I wasn’t gay I was just “artistic” and everything was going to be OK!

One day I was walking from the library to the canteen and a group of Year 10 boys yelled out “Oi you bloody Pillow Biter, when did you become such a fudge packer!?” ——- For the life of me I couldn’t work out why I was biting pillows and or packing fudge!?!

In the summer of 1997 it is no surprise to me now that I was on the search for the very basics of identity and acceptance. I was invited to a Hillsong Summer Camp on the north coast. Wowey wooey what an intoxicating mix of fellowship, community, love, acceptance and best of all great music!

Throughout the week on the north coast I had reached out and touched God himself.

I finally had an identity, an identity in Christ. I had instant friends. I had a community. I also had two new goals – Number 1: be more like Jesus and Number 2: sing in that bloody band!

This love, community and fellowship helped me sail through my teenage years supporting the development of values such as forgiveness, truthfulness and compassion. I embraced every single aspect of Hillsong Church from its culture of service all the way to its’ world famous worship team.

In this space. I was accepted. I was embraced and celebrated as a unique member of the church family. It felt oh so good.

My family were not in the church – so they kept a distance and had no idea what the hell was going on – Mum was just happy I wasn’t taking drugs. I limited friendships to inside the church to maintain the purity of my faith. I got stuck in and led the Youth Choir, sung on a couple of albums and was one of the founding members of Hillsong Kids 4 – think of Hi5 with a very very large serving of Jesus. I was thriving in my new found faith.

Well, at least thriving on the outside.

Hidden behind closed doors I had a big conflict and at the time I definitely did not have the resources to deal with it.

It turned out – I had quite a strong passion for looking at naked men. A passion I could not shake very easily. This secret would stay with me for many years and actually come to haunt my every day.

People always ask did you know? You know, did you know you were gay? Come on look at ya, you must of known!!!

I know one thing to be true – You can bury the most precious of gems deep enough and you can forget that it is even there. Talking to the creator of the Universe is a great distraction from the cute boy in the back row of the choir.

When I was 20 years old it came time to tell Hillsong Leadership about my big dark and scary secret. My world instantly collapsed. Leadership asked me to leave the worship team. I was asked not to tell anyone and as a result I became incredibly isolated in my sin.

I sobbed most of those days. I felt numb. I feared that this sense of evilness and isolation would never end. My friends of 10 plus years were not able to offer support or love because they were kept totally in the dark.

I was encouraged to exercise to enhance my masculinity, we prayed the demons off my back and I was sent to an outside minister for counselling who had a specialisation in homosexuality and more earth shatteringly for me child sex offenders.

I felt evil beyond words. I felt demons crawling all over my body and the depths of despair can not be described here in this speech. The identity I had curated within God’s eyes had vanished overnight.

It is hard to say how one survives these earth shattering moments – most of us do. We usually have family and friends to support us when we are called to be brave.

We who come from faith backgrounds often don’t. Because of the effect of faith on our social structures, our family dynamic and the relevance of faith and religion to how we perceive the very core of ourselves – we are left to be resilient, self sufficient and to connect with our greatness within.

I then transformed my life into a series of events perfectly designed to be thoroughly normal in every possible way. I came bouncing out of the closet and felt free to now take on the big bright gay new world in front of me – so I fell in love with a girl 🙂

I could tell you about that heart break or the 7 year relationship where I lived like a middle aged man for a large portion of my early 20s. I could share with you about the time when I first realised what a pillow biter actually was 🙂

I could also cover the years of therapy where I embraced my true self and decided to let go of the broken and fractured view I was gifted from my faith. I could share with you the moment my family became my biggest supporters or all about the amazing humans I call my friends.

But I won’t (maybe later over a glass or two you never know) – but I will finish up here and now by telling you a little story about a book I was given by my Aunty Denise a handful of years after I came out – a book called ‘A Life of Unlearning’. Once it was in my hands I devoured it in a few short hours. I was enthralled and gobsmacked to learn – that I was not alone.

I could not believe people who were dealt much worse experiences than I had made it through and came out the other side resilient and empowered to fully contribute to the world. This book woke me up and set me on a path of self discovery, authenticity and self development that I still embrace every single day.

A couple of years later I was at a Pride in Diversity networking drinks at the lux Goldman Sachs offices in the city. You know getting to know my people.

I was tucked away in a corner sipping on some non vintage Chandon when an older gentleman approached in a hat.

Introductions, nodding, oh yes, isn’t this space wonderful, ooh lovely bubbles aren’t they —— all whilst I had one eye firmly planted on the gorgeous eastern European waiter serving us drinks.

The older gentlemen wasn’t phased and was much more focused on his next question —– “Are you from a faith background?”. I nearly spat out my Chandon all over his face. Over the next couple of hours we shared, laughed, cried, embraced and kicked off one of the most important and special connections I have.

It is Anthony Venn Brown who reached out through his writing to pick me up, gave me permission to feel normal and a part of a new community.

I stand here tonight with a loving partner of 2 years, I am embraced daily by my amazing family and friends and feel empowered to live a wonderfully blessed life.

ABBI and Anthony Venn Brown deserve our personal support AND the support of our businesses to extend their reach to impact many more thousands of people who are………just……like…..me.