Part 5 “A Journey to Exodus – the last days” 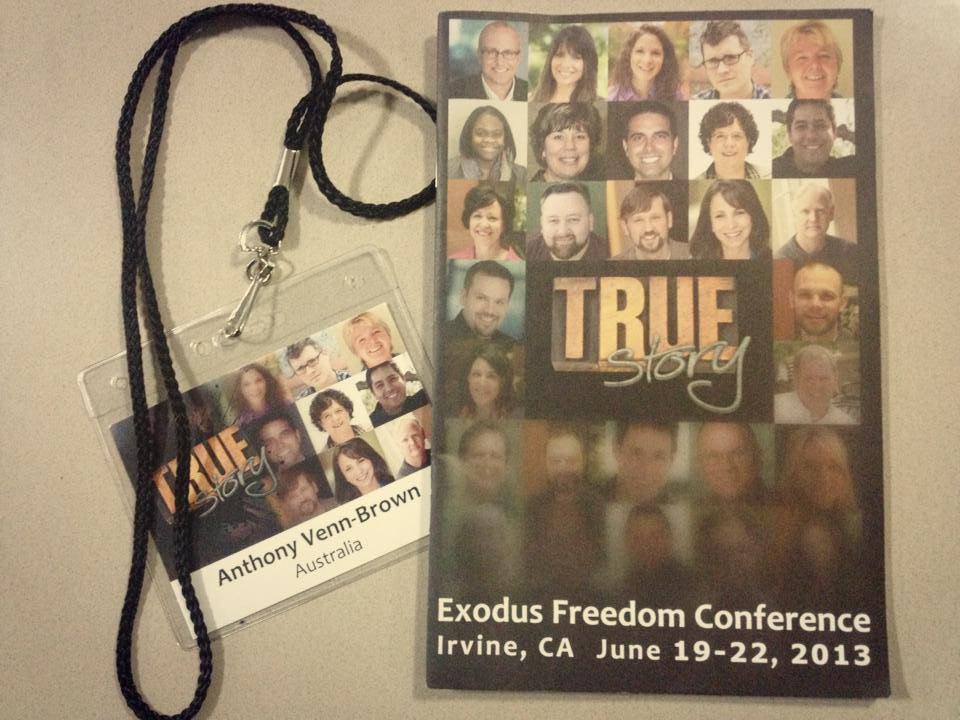 The next three days included a full program of speakers and workshops from 9am to 9pm. The theme “True Stories” seemed particularly appropriate as people continued to honestly share their journeys. No real victory stories, just people trying to make some sense out of their lives. Some had already come to the place of full acceptance of their sexuality but were choosing a life of celibacy, still seeing their sexuality as not a part of God’s “ideal”. Occasionally I spoke with a person who was hoping that one day they would find love and a partner. Chatting with a young woman on the way to dinner, I inquired politely “So where are you at on this journey?” She paused a moment and then replied confidently “I love God” she paused again “and I love women”. I’m not sure if she had said that to anyone else before but I loved the succinctness and simplicity in her answer. It spoke volumes to me. I knew exactly where she was on the journey. Full self-acceptance, her same sex orientation integrated with, not separate from or in opposition to her relationship with God.

“Gay”. Now there is a word not often heard previously at an Exodus conference except in terms like the “gay agenda” or “gay lifestyle”. The term used normally is “same-sex-attractions”, usually with the adjective “unwanted” in front of it or a verb like “I struggle with” or even worse “I have same-sex-attractions” sounding like a mental health condition or terminal disease. But of course, Exodus had preached for years, homosexuality didn’t have to be terminal, freedom came to those who resisted temptation and kept their eyes on Jesus. Attending a workshop later in the conference I heard one minister make a statement that still rocks me today.  It was said with confidence and an air of “expertise” that came from a straight man who’d spent years working in this area. He used three fingers to make each point and ensure everyone understood the distinction.

“Gay is a cultural identity to be rejected.

Homosexuality is a lifestyle choice.

Same sex attraction is a feeling”.

You can probably imagine that it took every bit of self-control and grace I could muster to not jump up and say “What a load of crap. All those things you’ve mentioned are an orientation. Neither a lifestyle nor a choice. An orientation that is healthy to embrace. And it’s not a feeling IT IS who I am”. But I was not there to be a troublemaker; I’d been given a privileged invitation. I quietly excused myself from the workshop, went outside and took deep breaths.

Amongst the broad spectrum of those attending, there were obviously people who still had a long way to go. Most likely they would go over to the Exodus splinter group Restored Hope Network who’d vowed they would maintain the “change is possible” message. Good luck with that.  It seems the last remaining ex-gay organisations in Australia are planning the same.

Jim Burroway made an interesting observation. During the workshops, every time a person (particularly a young person) mentioned the term “same sex attraction” to describe their experience, their demeanour changed. Automatically, they looked down, avoiding eye contact and shoulders drooped. Their body language spoke of shame, shame, shame. I felt sad for them. Shame is attached to beliefs like “I am a failure” and “I am bad” which undermines self-esteem and self-worth. Living with this for too long is soul-(self)-destroying.

These poor kids and young adults I reflected. They have been locked in a prison of Christian cultural ignorance and unnecessary shame. So unlike the wonderful gay and lesbian young people I know who hold their heads high with dignity, pride and self-respect. Alan’s apology for the shame they had caused will obviously take longer than a few days to correct. Having been entrenched for years, liberation is never instantaneous. Like the young elephant who is tied to a stake so it can’t escape, grows up being held by this belief (not the stake), unable to free himself in later life.

I had no doubts about what my role was at the conference. It certainly was not to cause trouble, argue or try to convert anyone but just to BE. Be me: a fulfilled, openly gay man who has no conflict with his sexual orientation and his faith. I sorted that out years ago. I have nothing to prove to anyone really. Over the next three days I got to meet some lovely people and had interesting, sometimes intriguing, conversations. Hearing my accent they usually began like this.

“Oh you’re from Australia. How wonderful. What do you do there?” I tried to explain the mission of Ambassadors & Bridge Builders International. Providing training and consultancy for churches and leaders to educate them on LGBT issues. To do bridge building between the LGBT community and the church. Some found the concept difficult to understand. One lady I was speaking to couldn’t quite get it. “I’m a professional homosexual,” I said laughing. She cracked up immediately. “Oh you’re on my side then” she said. We’ve been cyber-connected ever since.

Randy Thomas was the Vice President of Exodus. 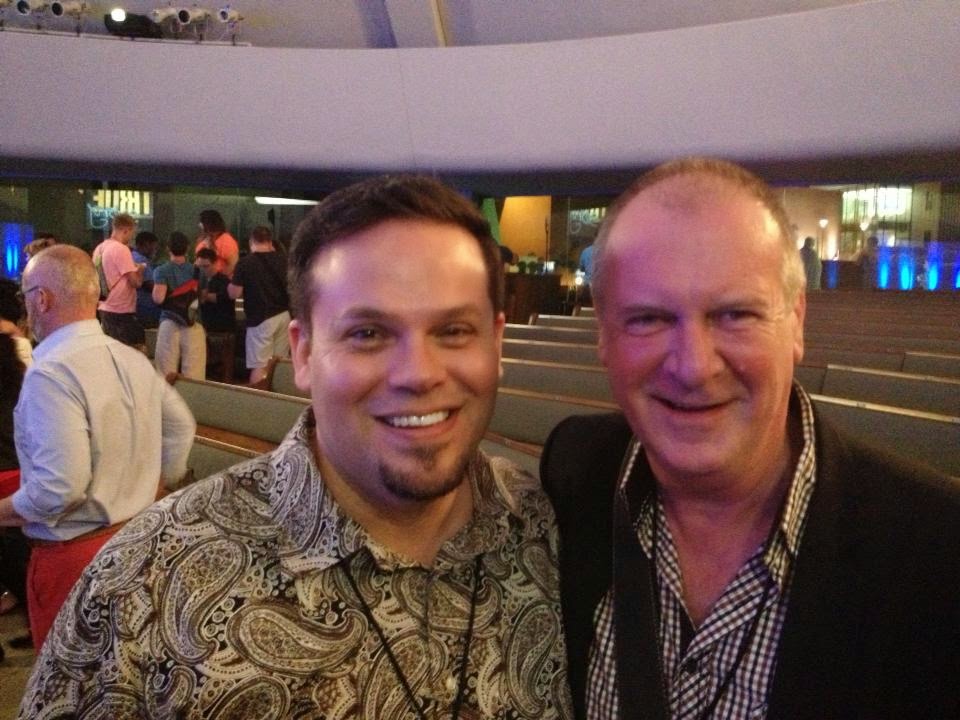 Now I couldn’t write about my Exodus experience without talking about Randy. It’s interesting how one can gain a perception of people without even meeting them, only to discover how far off the mark your original perception was.

I’ve been a part of the ex-gay survivors (people who have previously been in ex-gay programs and come out accepting their sexuality) world for nearly two decades. I couldn’t recall a single positive thing being said about Randy. In fact, some hated and ridiculed him. It’s challenging to be objective meeting someone you’ve never heard a nice thing said about. It didn’t take too long for the negative perception to fade. Randy, had what I would call a drag queen sense of humour. Not crude or smutty but sharp, clever, witty. Camping it up seemed his natural way of being and quite comfortable with. Unlike myself who, for decades, had suppressed the real me and monitored mannerisms, voice and gestures.

Over meals together we got beyond the humour as Randy shared openly and very honestly with me about his journey. Particularly that he had never considered himself an ex-gay but that he had allowed others to highjack his story for their own agendas. Honesty is always refreshing. From time to time he genuinely ask ‘What do you think about this or that Anthony”. It’s hard not to like someone who thinks they can learn a thing or two from you and value your opinion. The more time I spent with Randy the more I came to respect him and his journey. Even though the outcomes of our resolution have taken us to different places it is a level of resolution. Who knows? Maybe one day a man will come into Randy’s life and they will fall hopelessly in love and want to be together for the rest of their lives. I reckon he’d make an excellent partner. Good man. Good heart. Good sense of humour. I did enjoy his message at the conference “God used a drag queen to save my life”

Of all the apologies I have read Randy’s apology is the most profound. It’s not just an apology it’s a confession and is especially interesting as it looks back over twenty years of involvement as a participator and leader in the “ex-gay” myth. Whilst others have been cynical, to me, it demonstrates that Randy has done some deep soul-searching and self-reflection.

The conference was coming to a close and Alan had promised me an interview. I’d already been bumped back several times as every conceivable media outlet had had their piece of Alan over the last four days. The term “media frenzy” comes to mind. Actually it had been going on for days even before the conference. Most of the leading newspapers around the world and TV networks along with Christian media outlets got the story first hand from the man himself. I was pretty well the last. We sat down in the media room for 20 minutes. I was hoping for more. Not so much an interview but a conversation as we’d had in the emails but over a meal, bottle of wine or cocktail. I could see the man had little more to give. He was exhausted.

You can read the interview online here.

Walking back to the final meeting, Leslie pulled me aside. “I just wanted you to know that Alan has spoken very highly of you and appreciates you”. I thanked her and mentioned that I actually get what they had been going through more than others might so I appreciated her words. The time I’d invested in building the relationship and the hours I’d put into constructing well thought-out emails had paid off.

The final meeting came to a close. Alan prayed and finished with the words that were not only to the conference but to LGBT people and the Christian Church.

“The culture war is over. Let us lay down our weapons and be at peace”

And with the closure of Exodus, nearly four decades of unnecessary suffering, shame, torment and false hope had come to an end for 1,000’s of people. What will it look like for the new generation of young LGBT Christians raised in an atmosphere of acceptance and equality?

Can the church now allow its gay, lesbian, bisexual and transgender members to take their rightful place alongside their straight brothers and sisters?

Can the church rise to the challenge, let go of judgment, preconceived ideas and misinformation and reach out to the LGBT community with love and grace.

Can the church also take responsibility for the harm, ignorance and misinformation has caused and have the courage to say, like Alan, Randy and others, “We are deeply sorry”