This time,  twelve months ago I was alone, weeping in a hotel room in West Hollywood. I sobbed deeply,  as if grief had overcome me. It began while I was watching the DVD of the only session I  missed during the previous four days of the Exodus conference. I wasn’t just  weeping over the devastating story told by Robert and Linda who had lost their  gay son Ryan. but for the endless stories I have been hearing now from LGBT  (lesbian, gay, bisexual, transgender) people for nearly two decades. It had  happened numerous times as people shared with me the tragic outcomes, theirs,  and others’ ignorance had created in their lives. There is nothing more tragic  than a suicide. A life lost, young or old, when it could have been so much  better for them.   I thought  I’d toughened up or become de-sensitized to the pain, but no, it was rising  overwhelmingly in me again, triggering memories of my own darkness and  struggle. Twenty years after I had left my time in one of the world’s first  ex-gay programs, believing one day I  would be straight, I was facing a chilling reality. In 1991, in the darkness I  stood on the cliff edge, knowing what I had to face the following  day, wavering, should I walk back home or walk off the cliff? . Another  twenty years now after that bleak night I was questioning, was I a true  survivor a victim or casualty of the ex-gay “Change is Possible”  message?

Arriving at  the Exodus Conference 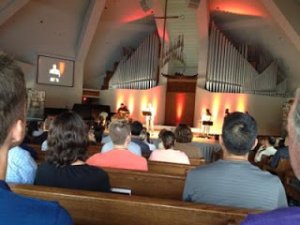 To say it  felt weird, walking onto the Concordia University campus in Irvine CA to attend  the Exodus conference “True Stories” on the 20th of June 2013, would be an  understatement.

The last  time I was in Irvine was 2007, as the only Australian, to attend the first Ex-gay Survivors Conference. The Survivors  conference was held at the Irvine University campus to coincide with the Exodus  “Freedom” Conference, only kilometres away, where 1,000 had gathered  to hear the message preached “Freedom from Homosexuality”.

Now here I  was, exactly six years later, at the Exodus Freedom Conference; the ‘enemy’  camp as it were.  .

Something  didn’t seem right. Not many people around and poor signage made it difficult to  find the separate registration area. Too much about the next four days was  unknown to me so I’d chosen to stay in a nearby hotel to escape if I had to.  Attending the conference meetings and workshops was going to be challenging  enough without staying in that environment 24 hours a day.

I knew I  had limited time to get registration sorted out as preceding emails warned me  of tight security and without registration, no one, and I mean no one was  getting into the auditorium for the first crucial meeting. Where was the slick,  well-oiled, American razzmatazz of the big ex-gay machine and the 1,000’s  attending I had read and heard so much about? Maybe it had been a clever  branding exercise and Exodus didn’t have the millions of dollars people  claimed. The university campus was deserted for the summer break, adding to the  eerie feeling. Occasional passers-by smiled and said hello. No-one I saw seemed  very excited. Possibly the recent developments were already having an impact.

At least  there would be one other person attending I knew. My friend Jim Burroway from Box Turtle Bulletin had also been granted permission to  attend. As far as I knew we were the only two gay advocates there. Everyone  else was from the “other side”.

The person  I was really waiting to finally meet face to face, was Alan Chambers: the  president of Exodus International.

But what was Anthony Venn-Brown doing  at the Exodus conference?

The person  who has publicly stated his goal is to see all ex-gay programs close in Australia  and worked consistently to de-construct the ex-gay “Change is  Possible” myth frequently promoted by ex-gay/reparative/conversion leaders  and organisations.

As the name  implies, Ambassadors & Bridge Builders International philosophy is to reach  out and build bridges where we can. Dialogue always creates better outcomes  than attacking. “It’s better to have  a long conversation than a raging debate” to quote Alan Chambers tweet  of February 2013. I agreed and retweeted.

I can’t  disclose all that is in the email communications over three years,. I learnt  very early, doing bridge building, about the need for confidentiality and  providing a safe space for those we are dialoguing with. It’s not an option,  it’s essential. I gave Alan my word I would not disclose the content of our  discussions without his consent. He often said go ahead.

At this  time, Exodus withdrew its support from the Day of Truth, held the same day as  the Day of Silence. On the Day of Silence, founded in 1996, students take “a  vow of silence to bring attention to anti-LGBT name-calling, bullying and  harassment in their schools,”. In 2005, a number of ultra conservative  groups, including Exodus International, banded together to create a counter  campaign called The Day of Truth. The Day of Truth “was established to counter the  promotion of homosexual behaviour and to express an opposing viewpoint from a  Christian perspective”.

After a  spate of well publicized gay youth suicides  in 2010, Exodus pulled out of the Day of Truth and Alan’s statement on the  Exodus International website read. “All the recent attention to  bullying helped us realize that we need to equip kids to live out biblical  tolerance and grace while treating their neighbours as they’d like to be  treated, whether they agree with them or not.”

I sent Alan  an email expressing my gratitude and re-enforcing why their new decision was  important.

After my  personal background introduction I wrote

“I’ve just read a report that Exodus is not supporting the Day of Truth to counteract the  Day of Silence…….in light of the recent revelations of gay youth suicide. Of  course what many of us know is that this is not a spike in suicides they have  been going on for decades. What is really sad is that it has taken so long to  mobilise people to change this tragedy.

I wanted to say thank you for that……and the  acknowledgement of the potential for further harm.

Whilst we may hold differing views there is a higher  purpose we are all called to……love.

Some have used Exodus and its message to justify and  promote hate……and reject those they should love.

So thanks for taking this recent step…….it will literally  save lives”.

I knew that  there would have been an avalanche of emails pouring into Exodus and wondered  if I would even get a response. It was refreshing to get a brief, but courteous  reply from Alan himself, considering other Christian leaders and organisations had chosen to  ignore several polite emails instead.

From that  point, every time Alan or Exodus said or did something positive, I sent an  email expressing my appreciation. And there were several opportunities to do  that.

In 2011  Exodus quietly removed articles about homosexuality being demonic possession  and that exorcisms were one way of freeing a person from their  same-sex-attractions. (This is still believed by Exodus Global  Alliance. Exodus Global Alliance is a loose affiliation of ex-gay ministries  around the world that was separate to the much larger and more influential  North American Exodus International)