Homophobia and/or Heterosexism – what’s the difference

Homophobia and/or Heterosexism – what’s the difference

Homophobia encompasses a range of negative attitudes and feelings toward homosexuality or people who are identified or perceived as being lesbian, gay, bisexual or transgender (LGBT). It can be expressed as antipathy, contempt, prejudice, aversion, or hatred, may be based on irrational fear, and is sometimes related to religious beliefs. Homophobia is observable in critical and hostile behavior such as discrimination and violence on the basis of sexual orientations that are non-heterosexual. Recognized types of homophobia include institutionalized homophobia, e.g. religious homophobia and state-sponsored homophobia, and internalized homophobia, experienced by people who have same-sex attractions, regardless of how they identify.

Heterosexism is a system of attitudes, bias, and discrimination in favor of opposite-sex sexuality and relationships. It can include the presumption that other people are heterosexual or that opposite-sex attractions and relationships are the only norm and therefore superior. Although heterosexism is defined in the online editions of the American Heritage Dictionary of the English Language and the Merriam-Webster Collegiate Dictionary as anti-gay discrimination and/or prejudice “by heterosexual people” and “by heterosexuals”, respectively, people of any sexual orientation can hold such attitudes and bias. Nonetheless, heterosexism as discrimination ranks gays, lesbians, bisexuals and other sexual minorities as second-class citizens with regard to various legal and civil rights, economic opportunities, and social equality in many of the world’s jurisdictions and societies. Heterosexism is often related to homophobia. The LGBT rights movement works towards ending heterosexist discrimination. 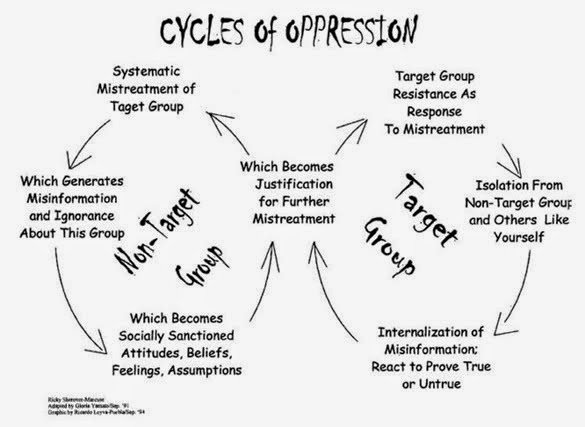 Share this article using the social media buttons below.