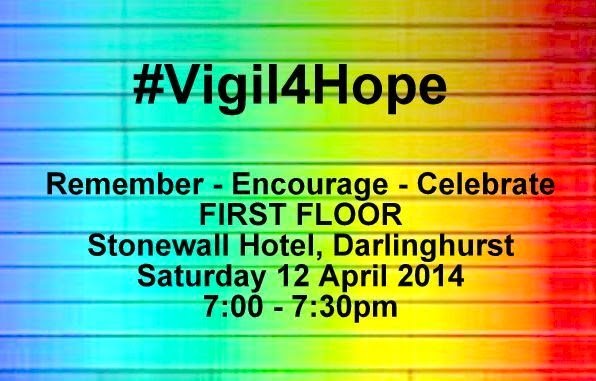 Living Waters Australia (LWA), one of Australia’s foremost and longest running ex-gay/conversion therapy programs, closes this Saturday with a Thanksgiving Service. At the same time a vigil (#‎Vigil4Hope) is being held at Taylor Square, Sydney, to not only remember those who have taken their own lives because of ex-gay/conversion programs but also highlight the toll faith/sexuality conflict can have on gay and lesbian people.

The closure of LWA is significant and worth acknowledging in a public way which is what prompted the vigil. #‎Vigil4Hope
Ex-gay/conversion groups like LWA have claimed to have helped people struggling with“unwanted same sex attraction” and they know of no one who has been harmed but we know this is not necessarily true.

Participants in these ‘change is possible’ programs are often emotionally and psychologically damaged. They left the program with a sense of failure. It can take years to work through the trauma, grief and the impacts of years of shame and self-loathing.The actual toll of those who have taken their own life, because of faith/sexuality conflict, can never be determined for several reasons. One being there is no box to tick that says cause of death; faith/sexuality conflict. The secrecy and shame attached to homosexuality in evangelical circles are others. If you consider that for many of these people, the acceptance or rejection of their sexual orientation has enormous consequences, including their eternal destiny, you can begin to understand the intensity of their struggle.

The thirty minute gathering on Saturday night will focus on three things.

You can RSVP on the Facebook event page and also use that to invite friends.

Date: Saturday 12 April
2014
Time: 7:00pm to 7:30pm
Place: First Floor Stonewall Hotel 175 Oxford Street, Darlinghurst
What to bring: Candle, torch,
rainbow paraphernalia
What to wear: Something yellow if
you can to represent hope for a better future
Who can come: All welcome
including straight allies and supporters.We recognise that many people would love to participate in this vigil
however due to various locations, are unable to attend in person. We
would like to invite others to participate where they are. Please use the ‪#‎Vigil4Hope‬
in your Instagram, Twitter or Facebook updates and pictures during the
time that we are meeting at Taylor Square. If you feel comfortable
perhaps even share why this vigil is important or has relevance to you.

Together we can spread the word, the love, the encouragement and acceptance to so many across the world.

Anthony Venn-Brown is a founder of Freedom
2 b
[e]
, Australia’s largest network of LGBT (lesbian, gay, bisexual,
transgender) people from Christian backgrounds. He recently founded and is the CEO of  Ambassadors & Bridge Builders
International. He is an educator, consultant and commentator on LGBT/faith
issues and been committed to deconstructing
the ‘ex-gay’ myth in Australia. Anthony’s journey from married, high profile
preacher in Australia’s mega-churches to living as an openly gay man is detailed
in his autobiography ‘A Life
of Unlearning’. Anthony has been twice voted ‘One of the 25 Most
Influential Gay and Lesbian Australians’ (2007 & 2009) and was one of four
finalists for the 2011 ACON Community Hero Award.