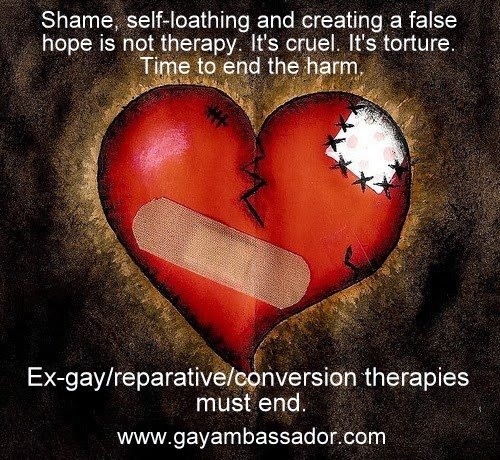 NEW HAVEN — THERAPY programs that purport to
“convert” lesbian, gay, bisexual and transgender kids have caused immeasurable
harm since they became prominent in the 1970s. Rigorous studies have shown
again and again that efforts to change young people’s sexual orientation not
only fail, but are also linked to suicidal behavior, depression, anxiety, drug
use and risky sexual behavior.

So it’s tempting to support the model of California
and New Jersey, the first states to ban conversion therapy. Under their bans, a
licensed therapist who tries to subject minors to such “treatment” can lose his
license and face other penalties. Similar bills have been introduced in
Massachusetts, New York and Ohio.

Legislative condemnation is a powerful public
statement. But if the goal is shutting down as many practitioners as possible,
this strategy has its limitations. For one thing, it’s unlikely that
conservative states, where conversion therapists are most active, will follow
suit. More important, such bans are likely to lead to costly and time-consuming
legal battles. Last week, the United States Court of Appeals for the Ninth
Circuit, which had upheld the ban, stayed its decision, pending an appeal to
the Supreme Court.
The bans tread on a volatile question: the degree
to which the First Amendment protects speech uttered by professionals, like
doctors and lawyers, in the course of their work.
While the Ninth Circuit found that the California
ban regulated “professional conduct” that is not protected by the First
Amendment, dissenting judges pointed to a 2010 Supreme Court case, Holder v. Humanitarian Law Project, that implied
that the First Amendment’s protections could not be ignored simply by
relabeling activities that involve speech as “conduct.” If the Supreme Court
declines to hear the California case (in which case the ban will automatically
take effect), this terrain will remain unsettled.
There is a more promising way to put pressure on,
or even shut down, conversion programs: existing state laws that forbid
businesses and professionals to engage in deceptive practices.
Despite the nearly universal consensus — including
the professional associations that represent America’s pediatricians,
psychiatrists, psychologists, school counselors, social workers and marriage
and family therapists — that “conversion” or “reparative” therapy is
ineffective, harmful or both, its practitioners, many of them affiliated with
religious groups, continue to advertise messages like “change is possible.”
Under commercial law, this is the very definition
of a deceptive trade practice. Victims could sue practitioners for damages in
state courts. With support from the Southern Poverty Law Center, several former
patients did just that in 2012, seeking damages under New Jersey’s Consumer
Fraud Act from an “ex-gay” group called Jonah (Jews Offering New Alternatives
for Healing). The plaintiffs cited Jonah’s false promise that it could “cure”
their homosexuality — for which it charged $100 per individual therapy
session. Last July, a state judge refused Jonah’s request to throw out the
case, which could soon go to trial.
Litigation isn’t the only recourse for victims.
State regulators are responsible for ensuring that therapists and other mental
health professionals abide by standards of professional conduct. States like
New York, Minnesota and California have laws that forbid state-licensed
professionals from using deceptive practices; in New York, for example, such
professionals may not use “advertising or soliciting that is false, fraudulent,
deceptive or misleading” or make claims that cannot be “substantiated by the
licensee.” Violations can result in fines and the loss or suspension of one’s
license.
While conversion therapists would have to be
targeted one at a time, the cumulative effect could be powerful. Many of the
remaining practitioners are affiliated with “ex-gay” organizations that provide
training and educational materials. A handful of successful suits and
regulatory crackdowns could destabilize this network by bankrupting these
organizations, raising malpractice insurance rates for individual conversion
therapists, and leaving practitioners to reconsider the value of persisting in
practices that are deceptive under the law.
While the precise number of conversion therapy
programs isn’t known, they exist in at least 20 states. Parents confused or
distressed about their children’s sexual orientation will continue to fall prey
to counselors who either promise what they cannot deliver (turning kids
straight) or, without scruples, try to profit from these families’ anxieties.
Their practices are despicable, but litigation and regulatory action have more
potential than new legislation, in the long run, to put these snake-oil
salesmen out of business.
By Anthony Venn-Brown OAM|2019-04-15T22:22:38+10:00February 14th, 2014|Categories: Conversion therapy, News article|Tags: Gay conversion therapy|0 Comments