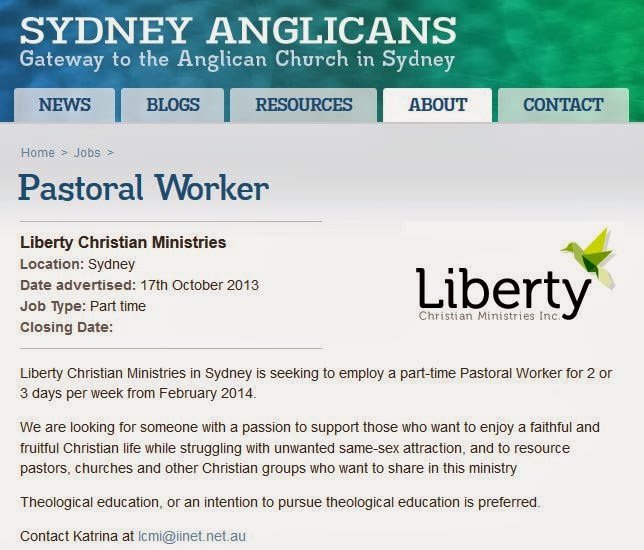 One of few remaining Australia’s ex-gay/reparative/conversion therapy ministries, Liberty Christian Ministries, is advertising for someone to work for the organisation (advertisement above).

After 15 years of monitoring ex-gay organisations and knowing many ex-gay leaders (former and current), it made me think what a realistic job description might look like. Probably something like this.

Successful applicants will have to answer these 20 questions

Anthony Venn-Brown is the co-founder and former leader of Freedom2b, Australia’s largest network of LGBT (lesbian, gay, bisexual, transgender) people from Christian backgrounds. He is also an educator and consultant on LGBT/faith issues and leader in deconstructing the ‘ex-gay’ myth. Anthony’s autobiography ‘A Life of Unlearning’, details his journey from married, high profile preacher in Australia’s mega-churches to living as an openly gay man. Anthony has been twice voted ‘One of the 25 Most Influential Gay and Lesbian Australians’ (2007 & 2009) and  was one of four finalists for the 2011 ACON Community Hero Award. He is also the founder and director of Ambassadors & Bridge Builders International.
By Anthony Venn-Brown OAM|2017-04-29T12:37:24+10:00November 13th, 2013|Categories: Conversion therapy|Tags: Conversion therapy organisations, Gay conversion therapy|0 Comments