Home/Event/PRESENTATION: Creating a Space for Change – this Sunday 20 October 7:00pm Glebe
Previous Next 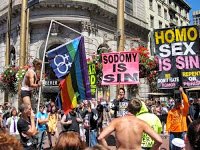 Historically,
engagement between the LGBT (lesbian, gay, bi-sexual, transgender) community
and the Christian church has been volatile. Little progress has been made when
either side have maintained entrenched attitudes and beliefs. One side being
called faggots, perverts and abominations whilst the other side labelled
haters, bigots and homophobes. Tired clichés of “Love the sinner, hate the sin” and “God created Adam and Eve not Adam and Steve” used
regularly by some Christian leaders, reminds LGBT people they are not welcome
in churches.

Is
there a way to move beyond adversarial, opposing positions?

How do we create
understanding and progress the conversation for acceptance and equality
forward?

Anthony
Venn-Brown was a leader in the Assemblies of God, a popular preacher in Australia’s
mega-churches and founder of Youth Alive (NSW). His personal journey of
reconciling his same-sex orientation with his Christian faith spans 28 years.
In 1991 he resigned from the ministry believing these two things were
irreconcilable and struggled to come to terms with the loss of his friends,
faith and purpose.

His
award winning autobiography ‘A Life of
Unlearning’ was released in 2004. Anthony has become an ambassador for the
LGBT community by encouraging respectful dialogues and educating people about
sexuality. Over the last 15 years has assisted 1,000’s of gay and straight
individuals to find resolution in these areas. Anthony is the co-founder of Freedom2b, Australia’s largest
organisation for LGBT people from Christian backgrounds. Anthony has also
become a respected community leader and his work acknowledged by being a
finalist for the  2011 ACON Community
Hero Award as well as twice voted one of the 25 Most
Influential Gay and Lesbian Australians (2007 & 2009).
Anthony
is now the founder and CEO of Ambassadors
& Bridge Builders International.
By Anthony Venn-Brown OAM|2017-04-29T12:38:38+10:00October 15th, 2013|Categories: Event|0 Comments