Hillsong: Pastor Brian Houston and the pink elephant in the room

Home/Church, Gay Christian/Hillsong: Pastor Brian Houston and the pink elephant in the room
Previous Next

Hillsong: Pastor Brian Houston and the pink elephant in the room

Pastor Brian Houston talks about the pink elephant in the room

Contrary to popular opinion, homosexuality or the ‘gay issue’ is not often mentioned from Hillsong pulpits; for or against. On Sunday 18 August 2013, Hillsong’s Senior Pastor, Brian Houston, preached a message that  was broadcast to all Hillsong congregations around the world in over 100 services. What was significant about this sermon was that during the message he publicly began a conversation about the Hillsong churches need to come to grips with the ‘gay issue’. You can read the relevant extract below.

Hillsong, like many Evangelical/Pentecostal churches, is coming to terms with the progressive LGBT changes in our western world. Whilst there have been right wing anti-gay preachers, particularly in the US, many church leaders in Australia hoped if they just closed their eyes or buried their head in the sand, eventually the issue would go away. I’ve often said that the problem is not so much homophobia but subjectaphobia; they would rather just not go into the volatile space of faith and sexuality. Possibly this is why Hillsong refused to comment on same sex marriage when approached recently by the mainstream media about it being an election issue. Other Christian groups were predictably quick to condemn Prime Minister Rudd’s promise to make marriage equality a reality in 100 days if re-elected. But now churches like Hillsong are facing the reality looming on the horizon, that in some countries, gay and lesbian couples may come into their churches who have a recognised, legal marriage. Some will be parents. They are no longer gay, lesbians or “homosexuals” they are believers, committed church members and families. What do they do about that? 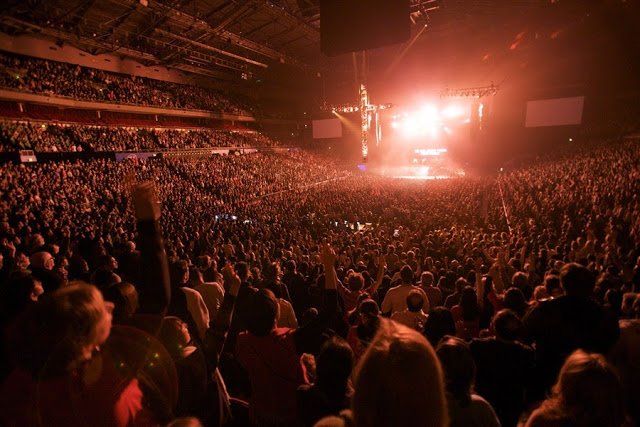 Also, Hillsong has always been a church that has reached out to people outside the church. If churches continue to hold on to the outdated Christian belief that homosexuality is a sin then it makes them increasingly irrelevant to those who have gay and lesbian friends, family members and work colleagues. The previous Christian labels of unnatural, perverse, evil and even abominations not only do not fit, they are offensive to many straight Christians with gay friends and family.

The longer churches put this issue on the back burner the further behind the developing world and western society they become. Considering the progress made in scientific research, changes in the law, and that homosexuality has not been classified as a mental disorder since 1973; some churches are 40 years out of date on the issue of homosexuality. I would hope that they catch up and make it a priority. Here are 5 reasons why.

For  a long time many of us have known of the tremendous harm experienced by gays and lesbians in Christian churches. This is something I wrote about in detail to the National Executive of the Assemblies of God in 2005 when Brian Houston was the president (you can read that letter here). It is good to finally have this acknowledged publicly. Maybe the recent statements from Exodus of the damage their message had on individuals and Alan Chambers and Randy Thomas’s apologies have also encouraged this.

I am pleased that Pastor Brian Houston has acknowledged the weight of this personally and, as a church, but as I mentioned to him recently “I know only a handful of pastors who are actually aware just how deep and extensive the harm is. And the reason they know is that they opened their churches to gay and lesbian people and listened to their stories.”

When working with churches,  leaders and denominations I let them know about the 10 separate issues they will face in order to become not just a welcoming but also accepting and affirming church. This is not a once off meeting or workshop it is a journey that will take several years to complete.

My hope and prayer is that this will be an ongoing conversation that takes ALL churches to a place where gay and lesbian people are treated with respect and equality. People of colour were once told to go to the back of the bus. Women were once told their place was in the home.  A paradigm change has happened in the world re people of colour and also women’s equality that is now happening about sexual orientation. When mega-church pastor Delman Coates spoke to his his 8,000-member Mount Ennon Baptist Church in Clinton he said he “apologized for participating in this conspiracy of silence,” and that “The people in the pew, are further along on this issue than those of us in the pulpit.”

On Sunday 18 August 2013, a sermon, ‘Scandal of Grace’ preached by Pastor Brian Houston, was broadcast to all Hillsong Church campuses around the world. Below is the relevant extract.

“The one elephant in the room for churches around the world at the moment is the gay situation. What would Jesus do? What would Jesus do? You need to pray for church pastors and leaders around the world because whichever way you turn the scandal is there. You can turn one way and you can tell there would be a great scandal amongst the Christian Church. You can turn another way and you would just cut off so many people. There’s lots of hatred out there but in the middle of it all you know there are three things: the world of the times we live in; the weight we live with; and the word we live by.Think about that! The world has changed quickly. The world has changed and so I’m not saying that the church ever should be ruled by the way of the world but the reality is we are in a world which is changing fast. Here in Great Britain the laws have passed. The world is changing. We’ve got the world we live in to consider. We’ve got the weight we live with. You say what’s that? Well it’s the weight when a young person growing up in a church feels like they are confused in their sexuality. They feel like “maybe I’m gay” and they go to a youth leader and they are rejected. At that moment a great hatred comes in. At that moment some of them have gone so far with the rejection and gone to parents who didn’t understand and ended up committing suicide – That’s the weight we live with.

“For a start I think everyone deserves the right to be happy. And I wish people happiness. I don’t necessarily, personally, believe that gay marriage is God’s definition of marriage. But I believe that as a church we can exist in that world.”

STOPPRESS: Hillsong r not preaching against gays. We r not stooges of the right nor teachers of excessive wealth. Just helping+loving people

Media Statement  on Issues of Sexuality 2008

As a church we always endeavour to treat people compassionately whatever they may be facing in life. We are a Christian Church and as such believe the Bible provides us with clear teaching on sexuality and sexual expression – heterosexual and homosexual. But I do not believe this is about rules and regulations as much as God wanting what is best for each of us. The heart of God is toward people, and I believe that is also the heart of our church.

God has created each of us as sexual beings, and I do not believe it is His will for it to be complicated. However, I recognise that people face very real issues in regards to sexuality. I have seen this both in my wider family, our church and society more generally.

This is a global challenge that most of the world’s churches are grappling with, and we, like them, are trying to balance theology with compassion.

We do not profess to have all the answers, nor has the church worldwide  always got it right, but we will continue to try and connect people to Jesus because we know that hope and answers for every situation and circumstance can be found in Him.

“I think that the homosexual question and sexuality generally is one of the most challenging questions there is for the church in the 21st century. And it’s one where I feel conflict myself, as a believer in the Bible and specifically the New Testament, I think that marriage is God’s idea, and I think it’s for a man and a woman. But I also represent a God that’s merciful and gracious and kind, and having to connect those two things I think is one of the great challenges for me as a church leader.”