One statement we have heard over and over again is that 1,000’s have left the “homosexual lifestyle”. Claims have even been made that there are 100,000’s.But we have never been able to find these 1,000’s of people or are they too afraid to come out as “ex-gay”?

Statements about large numbers “leaving homosexuality” have been boldly declared regularly by religious leaders and organizations such as Focus on the Family,  Family Research Council, Exodus, Charisma Magazine, Frank Worthen – Love in Action, Parents and Friend of Ex-gay (PFOX) – to name a few.

People have been exiting the “ex-gay” closet by the back door for decades as they come out in their 40’s, 50’s and even 60’s; finally admitting that nothing ever changed and they have accepted the fact that they have always been and always will be gay. The impacts on former spouses and children when the marriage becomes unsustainable can be devastating.

It is public declarations made by high profile people like John Paulk,  Michael Bussee (one of the founders of Exodus), John Smid former Director of the ex-gay residential program Love in Action that cause the “ex-gay’ tent to deflate the most. Even Exodus’s current leader Alan Chambers admitting that 99.9% of people he’d met had never changed their orientation.

The same thing has been happening in Australia with former”ex-gay” leaders for some time.

Yesterday, American Family Radio’s Sandy Rios spoke to Ex-Gay Pride Month organizer Christopher Doyle about today’s ex-gay lobby day on Capitol Hill. Doyle, who was organizing the since-cancelled Ex-Gay Pride banquet at the Family Research Council, complained in an interview with the Christian Post that “un-American” LGBT rights advocates have “shut us out,” explaining that “because of all this homo-fascism and indoctrination in the media, ex-gays aren’t given a fair shake.”

Rios confidently predicted that “thousands of ex-gays are descending” on Washington for a press conference planned for today at the Supreme Court. She lamented that when she led Concerned Women for America the media refused to hear “our ex-gay friends” because it “undermined the whole effort of the homosexual lobby.”

Doyle told Rios that “tens of thousands” of ex-gays exist but are “in the closet because of fear, shame and threats from gay activists. They’re just too afraid to identify themselves. And I hope they can receive hope from people like me, and people who are going to be out there trying to give them a voice,” he said.

Clearly their hope and strategy didn’t work. Despite the expectation that “thousands of ex-gays” would partake in Ex-Gay Pride Month, fewer than ten people showed up for the big event. And on the YouTube video they had to highjack unsuspecting tourists  to promote their cause. 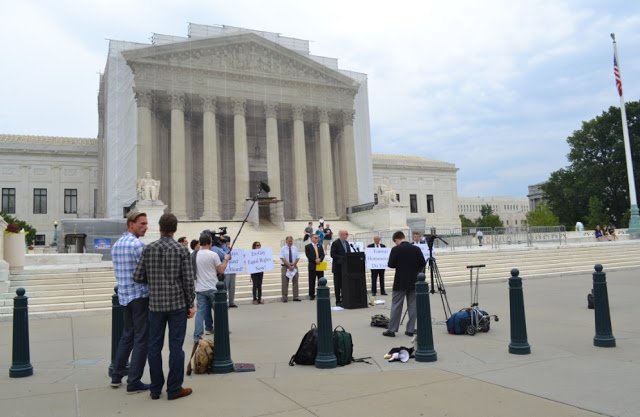