The media in Australia seemed to miss the news and significance of the oldest and largest ex-gay/conversion/reparative therapy organisation shutting down after 37 years. The Sydney Morning Herald published a small article titled “Gay Cure Therapy will continue”. The article was poorly researched as evidenced by not only Alan’s age being misquoted (37 was how long Exodus had been in existence, not Alan’s age) but also comments from those the journalist had contacted. For example, Peter Stokes from the Salt Shakers saying ” “It’s very sad to see a good organisation being ripped apart by one individual.”  If Mr Stokes had actually listened to the address that was available on the internet then he would have known this was not one individual (Alan Chambers) but an entire board decision laboured over for at least 12 months. The SMH article headline should have read “Gay cure’ therapy will continue ….(to disappear)”

Maybe I’d been too successful in creating my Secret Mission and people didn’t realise I was actually there. I was already blogging about events and my newsletters where keeping subscribers updated. I’m sure Mr Google could have helped a few Aussie journalists track down a reliable source for their story. Noel Debien, from the ABC Radio National did his homework and tracked me down in the hotel in West Hollywood. This interview aired a couple of days later.

A ministry to “ex-gays” closes down 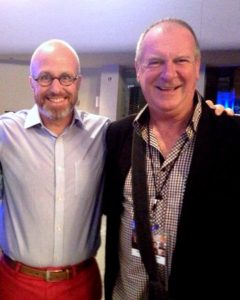 The leader of Exodus International, Alan Chambers, made a formal and public apology to men and women traumatized by Evangelical Christian attempts to change their sexual orientation. Exodus International held its what we now know was last conference at Concordia in Orange County, California. The apology outraged some Evangelicals who consider Mr Chambers a sell-out. Some gay and lesbian activists have also derided the apology as inadequate, because Exodus International has not affirmed same-sex relationships. Ex-Gay Ministries have consistently said that through prayer and counselling it is possible to change your sexual orientation; to become heterosexual. So this public apology from the world’s oldest and best known ex-gay organisation is significant. Australian Anthony Venn Brown leads the LGBTI consultancy Ambassadors and Bridge Builders International. He is also the author of A Life of Unlearning, in which he describes his own unsuccessful experience of reparative therapy, and coming out as a gay man. He attended the conference in California. Haydn Sennitt was the pastoral worker for Liberty Ministries until just recently, when he joined Exodus Asia Pacific (not affiliated with Exodus international) as its new Vice-Chair, a role he has only just taken up. Haydn Sennitt speaks in his personal capacity only, and not on behalf of either organisation.

Anthony Venn-Brown:Former evangelist, Assemblies of God church; author, A Life of Unlearning: a preacher’s struggle with his homosexuality, church and faith.