John Paulk admits it was a sham.

“In 2003, I left the public ministry and gave up my role as a spokesman for the “ex-gay movement.” I began a new journey. In the decade since, my beliefs have changed. Today, I do not consider myself “ex-gay” and I no longer support or promote the movement. I do not believe that reparative therapy changes sexual orientation; in fact, it does great harm to many people.”

“I am truly, truly sorry for the pain I have caused. From the bottom of my heart I wish I could take back my words and actions that caused anger, depression, guilt and hopelessness. In their place I want to extend love, hope, tenderness, joy and the truth that gay people are loved by God. ”

“I offer my most sincere and heartfelt apology to men, women, and especially children and teens who felt unlovable, unworthy, shamed or thrown away by God or the church. “

“This is a life transition that has been and will continue to be, challenging. I want to take the time to make sure my next actions come from a place of truth and authenticity. Therefore, I’m drastically limiting my public engagement until my own personal life can be settled. After that I eagerly anticipate giving back to the community.”

“.. there are still accounts of my “ex-gay” testimony out there being publicized by various groups, including two books that I wrote about my journey….. I don’t get any royalties from these publications ….I discourage anyone from purchasing and selling these books or promoting my “ex-gay” story because they do not reflect who I am now or what I believe today.”

These extracts above are from John Paulk’s recently released apology. 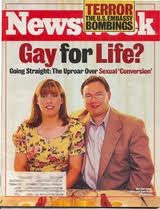 John Paulk was a former poster boy of the “ex-gay/conversion therapy” movement. He worked for James Dobson’s Focus on the Family, on the board of Exodus (the umbrella organization for ex-gay ministries globally) and spoke regularly at their “Love Won Out” conferences. One of his biggest claims to fame was his appearance on the cover of Newsweek in 1998 with wife Anne.All this came crashing down in 2000 when John was caught in a gay bar, Mr P’s, in Washington DC. Wayne Besen caught John on camera as he was escaping realizing that he’d been exposed. That now famous image appeared on the cover of Wayne’s exposé of the ex-gay movement, “Anything But Straight”.What transpired after that was a series of questionable excuses as to why he’d entered the establishment – including to use the bathroom. But John did step down from his positions in these ministries and with his wife Anne moved to another state to live a secular life and run a catering business.

This didn’t stop people around the world touting John and Anne’s story as an ex-gay “success” story. Even here in Australia, as late as 2004, the Australian Prayer Newsletter was quoting John Paulk….extensively.

One of the most divisive issues in the church and society today is homosexual orientation. Are people born gay? Is it possible to change? Focus on the Family tackled this topic at its Love Won Out conference in Washington, D.C. “We are motivated out of concern for those who feel trapped by homosexuality,” says John Paulk, a former homosexual who hosted the one-day conference. “Contrary to popular opinion, many people struggle with unwanted homosexuality and do not know that change is possible. This conference is a place for them to find the help and hope that I and thousands of other men and women have found.”

A decade later, John Paulk reappears with a very different message. I wonder if the Australian Prayer Newsletter will report on John’s genuine apology and his change in perspective. Most likely, if they report on it, they will put their own spin on it…that he has given into “sin” as some Christian organizations did with my story.To many, this is a reappearance by John, but others of us have known that his journey was far from over. Out of the “ex-gay” spotlight, there were some realities John was facing.

One statement we have heard over and over again is that 1,000’s have left the “homosexual lifestyle”. Claims have even been made that there are 100,000’s. But we have never been able to find these 1,000’s of people or are they too afraid to come out as “ex-gay”? Statements about large numbers “leaving homosexuality” have been boldly declared regularly by religious leaders and organizations such as Focus on the Family,  Family Research Council, Exodus, Charisma Magazine, Frank Worthen – Love in Action, Parents and Friend of Ex-gay (PFOX) – to name a few.

Here in Australia the same claims have been made by Rev Fred Nile of the Christian Democratic Party, Bill Muehlenberg, Ron Brookman – Living Waters, Peter Stokes – Salt Shakers and Margaret Court People have been exiting the “ex-gay” closet by the back door for decades as they come out in their 40’s, 50’s and even 60’s; finally admitting that nothing ever changed and they have accepted the fact that they have always been and always will be gay. But it is public declarations made by high profile people like John Paulk that cause the “ex-gay’ tent to deflate the most. Others have included people such as Michael Bussee (one of the founders of Exodus), John Smid former Director of the ex-gay residential program Love in Action and Exodus’s current leader Alan Chambers admitting that 99.9% of people he’d met had never changed their orientation.

The same thing has been happening in Australia with former “ex-gay” leaders for some time.

We are witnessing something many people believed impossible – the collapse of a movement and belief system that, for four decades, has declared homosexuality is a sin, choice and can be changed. HALLELUJAH!

I have been around long enough to know that the responses will be varied.

John you may have played closet hokey pokey. You may have been a situational heterosexual but now you have found the truth and have taken the brave step to be honest with yourself and the world. Thanks.

I look forward to seeing where this new journey takes you. I have no doubt it will be redemptive.