What is closet hokey pokey?

What is closet hokey pokey? 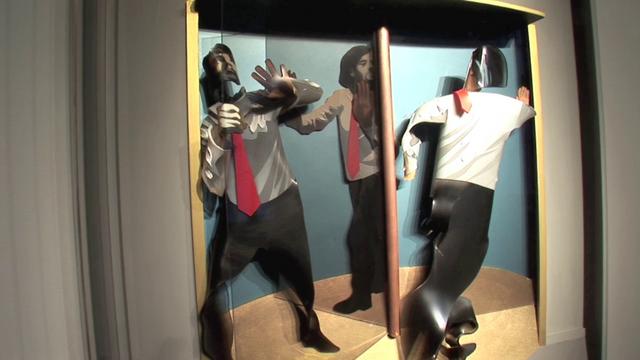 If you come from a faith background your struggle to accept your same sex attraction/orientation most likely will be more intense and take longer. You can read the reasons for that here.

The conflict between faith and sexuality creates an intense cognitive dissonance which produces stress and fragmentation of self – the two people we are (public straight self and the real gay self) seem irreconcilable. Living with this internal conflict eventually impacts us psychologically (e.g. depression), emotionally (distancing and unable to have intimacy or strong friendships) or physically (stress related illnesses e.g. high blood pressure, insomnia, ulcers etc).

When the anxiety and stress becomes too much we know we have to resolve it. We have to deal with the denial, suppression and be honest and accept that we are gay. It can take years to get to this point but we begin to be more vulnerable by opening up and share our ‘shameful’ secret.

We may do this by coming out to a few select people we feel we can trust, or our partner, if we are married, and so we begin to slowly open the closet door.

Once we begin to open the door we then think about the consequences and they scare us. The end of a marriage, rejection of family, friends, children. This is too great a price to pay and we will lose things we have highly valued in life. We may feel that we have been deceived and therefore will lose our eternal salvation – we retreat again. Or we come out and don’t feel like we fit in then go back. We may recommit to making the marriage work. Another factor that can drive us back into the closet is a sense of guilt for the hurt and trauma we will or have created in the lives of those dear to us.

Some people go through this process several times.

I did this several times over a 22 year journey to complete self acceptance.

I came out to a few people in my teenage years when the depression drove me to attempt suicide.

But then went back in the closet when I became a Christian.

A couple of years later I was still struggling to overcome my same sex attraction so I put myself into a residential ex-gay program for 6 months. This was an abusive and cultish environment and I left.

2. OUT of the closet

When I left the ex-gay program I came out again. This time though I lived openly as a gay man and became a part of the clandestine gay world of the early 70’s; but I never intended to stay there. I knew I had to ‘come back to the Lord’ some day as there was a ‘calling’ on my life.

Eventually I returned to the church and my faith again with a renewed vigour to overcome my homosexuality. When I felt I had enough control I got married but for the next 16 years continued to struggle, living a life of denial and suppression.

3. OUT of the closet

The second last time I decided to come was in my 40th year. I’d fallen in love with a man (love changes everything). The 22 years of struggle had taken their toll and I was worn out emotionally. I planned to leave everything, marriage, family and ministry – I could no longer live a tormented, fragmented life. My plans were discovered, I was outed and I resigned from the ministry.

When all this came crashing down, I thought I’d been deceived by the devil so dropped my plans to leave the marriage and re-committed to overcoming my homosexuality and making my marriage work.

4. OUT of the closet

After 12 months though I came to the awareness that this was damaging to myself, my wife and my children and that no matter how hard I tried neither God or anyone else could make me straight; – there was certainly nothing I could do to change it. So I came out totally and completely, left everything and moved to another city. I have been living as an open authentic gay man now since 1992. I would not or could not ever go back into the dark tormented space of the closet..

I know this is not everyone’s experience….but it was mine…..and I have discovered many others as well.

Whilst playing closet hokey we can move through greater levels of consciousness or awareness.

For example, I used to think I was in love with my wife. When I fell in love with a man I realised that I’d never actually been in love. My love for my wife was more about friendship, companionship and common purpose. It wasn’t  till several years after coming out number 4 that I finally realised that if I’d been in love with anything during those years it was being in love with the idea of being a husband, father and being ‘normal’.

The reason many of us from faith backgrounds play closet hokey pokey is that we have years of negative conditioning to overcome. This includes years of misinformation and ignorance about sexual orientation, the gay community and what it actually means to be gay. Loaded on top of that are years of self-loathing and internalized homophobia so there is much to fight through. Eventually most of us  reach a tipping point of enough information and positive experience that tips the scales and we know longer vacillate.

We can finally move on in life to new places of acceptance, freedom and authenticity. OMG….what a relief.

We create new levels of consciousness and awareness by educating ourselves, getting the right support and listening to others who have already walked the same journey.  During those 22 years I didn’t know of anyone or an organisation that could help me. These days this is no longer the case. There is support available for you.

You can read the full story in my autobiography ‘A Life of Unlearning – a preacher’s struggle with his homosexuality, church and faith’ Click here for Amazon.com  Reviews, readers comments and endorsements and Channel 7 Sunrise interview here

See YouTube playlist on Being Gay in a Straight Marriage here.