Mardi Gras and Pride Celebrations – To participate or not????

Home/Church, Gay Christian/Mardi Gras and Pride Celebrations – To participate or not????
Previous Next

Mardi Gras and Pride Celebrations – To participate or not????

This article orginally was published Jan 27, 2009 but I have just updated it with a relevant video at the end. 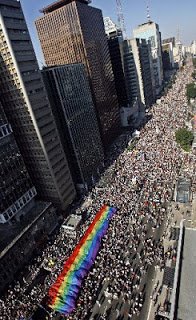 Everyone has an opinion about a Pride March such as the annual Sydney Gay & Lesbian Mardi Gras; often very strong opinions. Predictably, conservative Christians condemn it. Rev Fred Nile, leader of the Christian Democratic Party regularly condemns it. In March 2007 his media release read, “I call upon Anthony Venn-Brown and these marchers to withdraw from this blasphemous, obscene parade and not bring the Name of Jesus Christ into disrepute”. He believes that the judgement of God comes on Sydney because of it and each year encourages Christians to pray for rain on the night.

But criticism is not just from those outside the community. Even some gay and lesbian people think it’s not a good thing to have an annual community celebration, particularly marching publicly down a main street.
I love the Simpsons episode where Homer has taken the family to see the Pride march. As the marchers pass the family a group are yelling out the slogan. “WE’RE HERE! WE’RE QUEER! GET USED TO IT!
Lisa yells back “WE ARE USED TO IT! YOU’VE BEEN DOING THIS FOR YEARS”.
Whenever someone voices strong opinions against the Mardi Gras parade you can usually guarantee it means one or all of the following.
1. They have never actually seen the parade in its entirety
2.They have never participated in the parade and therefore don’t understand the dynamics of the experience
3. They have no knowledge of the history of the gay community’s parades and celebrations
False assumptions are the result of ignorance and that ignorance has meant that pride celebrations like Mardi Gras, have been labelled blasphemous, immoral, debauched or promoting homosexuality.
For many years, because of my own lack of knowledge and experience, I too was a critic.
Let me address each of these three points.

1. They have never actually seen the parade in its entirety.

2. They have never participated in the parade and therefore don’t understand the dynamics of the experience.

As one minister wrote the week after. “In some ways the hospitality of the Gay and Lesbian community was so gracious that we felt a rebuke as it is in the area of hospitality that we feel the church has been so remiss. Our attitude has been excluding. For me personally there was a sense that we were standing on Holy Ground as people connected with our act of contrition. It also felt during the march that we had the amazing privilege of making known the truth of God made known in Jesus who constantly took himself to the margins and to those who were left out and offered love and acceptance.”
I think I have never seen such a group of Christians so obviously following the example of Jesus Christ. When you read the gospels you read of a Jesus who never said I can’t go to this place or I can’t mix with these people. He was the great rule breaker. His life was a reflection of his parables (think about the lost sheep and the good Samaritan) He walked the talk. The Pharisees and often modern day Christians do the opposite however, separating themselves from people and places. Even a few of the 100 Revs didn’t march because they didn’t want to be seen promoting the ‘gay lifestyle’. By not marching with the others though, they were in essence saying, we don’t want to identify with the people we are saying sorry to. I guess we have to ask the simple question ‘What would Jesus do? The Jesus I read about would not have been concerned about what others would think.

3. They have no knowledge of the history of the gay community’s parades and celebrations

To understand Mardi Gras – we really need to understand its history.“It began on June 24, 1978 as a protest march and commemoration of the Stonewall Riots. Although the organizers had obtained permission, this was revoked, and the march was broken up by the police. Many of the marchers were arrested. Although most charges were eventually dropped, the Sydney Morning Herald published the names of those arrested in full, leading to many people being outed to their friends and places of employment, and many of those arrested lost their jobs as homosexuality was a crime in New South Wales until 1982.” http://en.wikipedia.org/wiki/Sydney_Gay_and_Lesbian_Mardi_Gras
Of those who were arrested and had their names published many lost their jobs and a few suicided as a result. Today, however there is a better understanding of sexuality, society attitudes and laws have changed, equality granted and therefore discrimination on the basis of a person’s sexual orientation is now illegal in this country. Obviously we owe a great deal to those people who marched in the first Mardi Gras. This is the day we celebrate our community and the progress we have made. Just as many historical events are celebrated annually.

Why do you have to have a special day and parade?

This is a criticism we often hear, ‘you are flaunting your sexuality and promoting homosexuality’ some people say.Every year there is a father’s day, mother’s day. Every day of the year around the world we celebrate heterosexual weddings and anniversaries, engagements, baby showers etc, etc. These are all celebrating heterosexuality and their relationships. Surely it is not to much to ask that for just one day a year, we too can celebrate our lives, journeys, culture and history as a community. Some people criticize and don’t understand why we have to have Gay Pride. The reason for that is pretty simple; they have never personally experience living with gay shame.