Trolls – don’t get sucked into the vortex

Trolls – don’t get sucked into the vortex 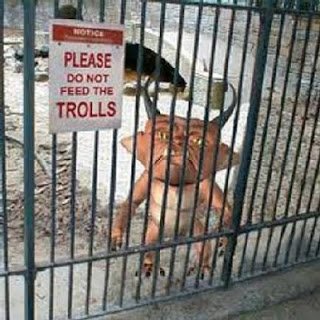 A troll is a person who posts deliberately provocative messages with the intention of causing maximum disruption and argument. They exist in the cyberspace worlds of Twitter, Facebook, comment threads and message boards.

The other day I tweeted:

@gayambassador #HICHURCH NB I don’t fight with conservative anti-gay christians. Instead of fighting I overcome ignorance and misinformation with truth. ow.ly/iTIfd

Then @OrganicMarriage  tweeted a reply

@gayambassador U belong 2 your father the devil, He has always hated truth, there is no truth in him bible.cc/john/8-44.htm  #truthxchanged

There’s often a huge temptation to respond to a message like OrganicMarriage’s. How dare they make such outrageous statements. I MUST defend myself.

BUT….resist the temptation to respond because if you don’t you’ll find it becomes a toxic vortex, which draws you in, winds you up, spins you around, stresses you out, drains you and eventually burns you out. After you have invested time and energy in the back and forth engagement with the troll you realise that absolutely nothing has been achieved. All you have done is gone around and around in circles. While you thought you were defending the truth and stand up for what is right but actually they were feeding off you…. like a parasite. YOU were giving them the oxygen to stay alive by responding to them.

To respond is to argue. An argument takes at least two people. If you don’t respond then they are talking to the wall…lost in space…cyberspace.

Leave the truth of your original statement to do its work on those it was meant to reach.

Use your time more effectively; with people who want to talk AND listen and have questions you can answer rather than those whose minds are made up. My experience is that there are more of the former than the latter. Thank God!

Don’t automatically react. Consciously choose your battles and use your time effectively with people of value.