Society has forever tried to tell homosexual people what they can and can’t be. 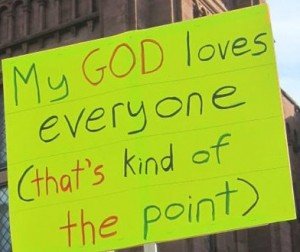 Some within our community preach the same message conservative churches do. Take your pick they say. It’s one or the other. You can’t be both gay and a Christian. This is not helpful, especially to young gay people growing up in a faith community, and we should reject that message whoever is preaching it.

We’re here, We’re queer, And we believe. Churches are getting used to the new reality and increasingly so is our community.

You no longer have to choose between your faith and your sexuality. An integrated, congruous life is a healthy life.