Is there anyone struggling with unwanted same sex attraction?

Home/Conversion therapy/Is there anyone struggling with unwanted same sex attraction?
Previous Next

Is there anyone struggling with unwanted same sex attraction?

I was doing some research last night and visited an Australian ex-gay ministry site, Liberty Christian Ministries. After talking about their intentions for 2013 this little footnote below is very telling. 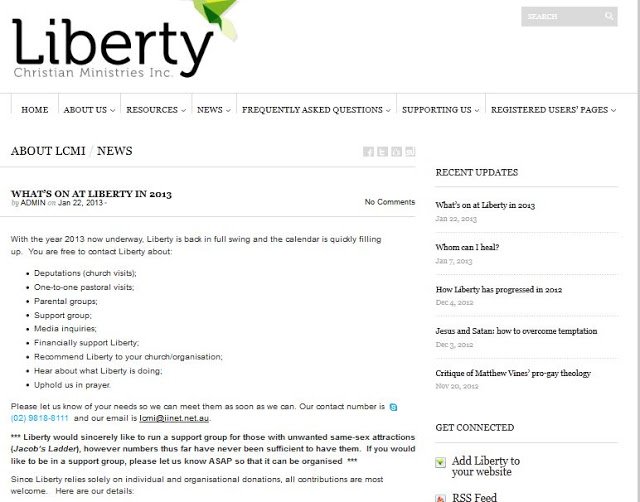 *** Liberty would sincerely like to run a support group for those with unwanted same-sex attractions (Jacob’s Ladder), however numbers thus far have never been sufficient to have them.  If you would like to be in a support group, please let us know ASAP so that it can be
organised  ***

Also in the 2012 report there was this: “This year I met with approximately 10 individuals to discuss overcoming same-sex attraction. On the whole, those that have stayed the course and have got to the end of their time with me have seen a lot of good fruit coming out of it.  However, in general, the meetings have been quite sporadic with most being inconsistent in coming to meetings and demonstrating a double-mindedness that has kept them from making real progress”.

Ten people in a year? I’ve lost count of the number of people I have worked with who have moved on to integrate their faith and sexuality instead of seeing them in conflict. We have never been ableto get the real figures from these organisations but under previous leadership the referrals for Liberty were in there hundreds annually and regular support meetings operating.

And  “On the whole, those that have stayed the course and have got to the end of their time with me have seen a lot of good fruit coming out of it.”  That all sounds very tenuous doesn’t it? “Stayed the course” – what does that mean? And “good fruit” – what’s that? Change from gay to straight? But of course the rest of the statement tells us the truth. – mostly (generally speaking) sporadic, inconsistent, double mindedness, no progress – it’s been a failure.

In 2007 I wrote this article Is my strategy working? after Living Waters Ministries revealed they were no longer having the impact they used to. (BTW the information on the Living Waters page is outdated. The research they quote as evidence that change can happen has been withdrawn by the researcher, Dr Robert Spitzer, and he apologised to the gay community for the harm it caused). In January 2012, in the gay press, I spoke about the decline of ex-gay ministries and in July 2012 announced that in the last decade 60% had disappeared in Australia and New Zealand.

All this is very encouraging that whilst formal organisations maybe in decline – the battle is far from over. You can read about the other more insidious threats at the conclusion of this article under the heading It’s not Over Yet!

It’s time for all ex-gay ministries to get with the right program. Our same-sex-orientation does NOT mean we are broken. It is NOT a choice. And you CAN’T change it. Stop wasting your time and years of other people’s lives dispelling misinformation and creating false hope. 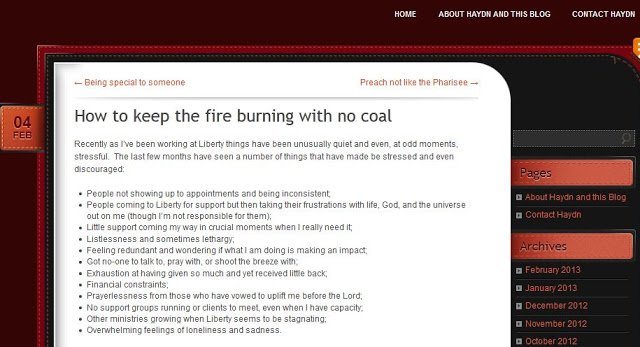 Possibly the reality of the futility of ‘ex-gay’ work is sinking in. The above screenshot is from Haydn Sennitt’s (Liberty’s pastoral worker)  personal blog. If you want to send a respectful (non-attacking) email to him you can do so at godsquasar@yahoo.co.uk. I have attempted several times to genuinely reach out to him and others but these have always been rebuffed. It would be good for Haydn to know that there are other people in the LGBT community and straight people who, even though we have very different positions, we are not the nasty, aggressive people often portrayed.. Many of us couldn’t condemn as we spent years in the same place and with the same beliefs he currently has and like him have been a on journey.

Share your journey with him in love – not anger or hate. He has heard that all before. It’s the same as some conservative Christian emailing me telling me I’m deceived and going to hell and quotiing bible verses as if I had no knowledge of them at all. Total waste of time and doesn’t warrant any response except the delete button. A genuine, sincere, respectful email to me has always had a response of the same tone.