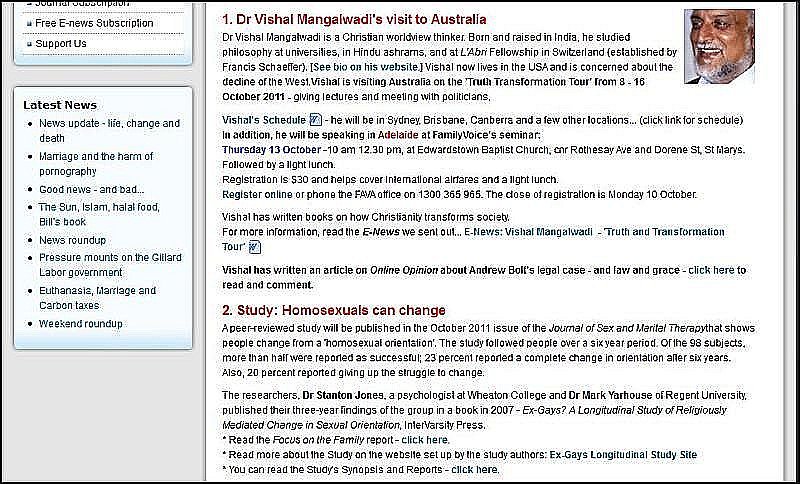 A recent study “A longitudinal study of attempted religiously-mediated sexual orientation change.” published in The Journal of Sex and Marital Therapy has been hailed by conservative US Christians in publications and websites as a breakthrough. A Christian political group in Australia, the Salt Shakers, was quick to follow, announcing ‘Homosexuals Can Change’. But the study is misleading and this kind of promotion creates mental health issues in individuals and breaks families apart. It’s not only irresponsible, it’s also un-Christian to lie and deceive.

The authors of the study, Stanton Jones and Mark Yarhouse, are both professors at conservative Christian universities. The study was taken over several years of 98 participants who were part of Exodus International ministries. Exodus International is an umbrella organisation of ‘ex-gay’ ministries worldwide which believe homosexuality is a sin and, as their slogan says, ‘change is possible’.

I have been working with ‘ex-gay’ survivors (gay and lesbian people who once tried these programs but eventually came to accept their same sex orientation) for over 10 years and I am deeply concerned about the impact this false promotion can have.

According to the Salt Shakers website, more than half were reported as successful in the programs and 23 percent reported a complete change in orientation after six years. This is misleading, by ignoring the fact that 37 people (38%) left the programs. For those of us who work in this area, we know that those drop outs were definitely not success stories.

When you do a thorough analysis of Yarhouse and Jones findings you are lucky find 14% who had some degree of change. But of course we need to define what ‘change’ or ‘success’ is. According the study change is celibacy, a suppression of homosexual desires, rejection of a gay identity or having sex with a woman. This is not a change from a homosexual to a heterosexual orientation as Christian conservatives are boldly stating.

To determine what ‘success’ means in this study, all one has to do is read this statement on the researchers own website which says “change of homosexual orientation may be possible through involvement in Exodus ministries, either a) in the form of an embrace of chastity with a reduction in prominence of homosexual desire, or b) in the form of a diminishing of homosexual attraction and an increase in heterosexual attraction with resulting satisfactory heterosexual adjustment. These latter individuals regard themselves as having changed their sexual orientation; the former regard themselves as having re-established their sexual identities to be defined in some way other than by their homosexual attractions”.

Jones also clarified their findings by saying “A typical hetero male finds himself attracted to a wide range of females. But among the successful people who reported conversion the typical response was I’m very happy with my sexual responses to my wife, but I don’t experience much hetero attraction to other women. Also, when asked and pressed about whether they still find attraction to men, they will say: ‘Yes, if I let my mind go in that direction.’

‘Ex-gays’ that get married and have a level of heterosexual functionality are nothing more than ‘situational heterosexuals’. Just like some heterosexuals might have same sex experiences in an environment like prison, ‘ex-gays’ can have a level of heterosexual functionality in a straight marriage….although this might be challenging as Alan Chambers, President of Exodus International, found out when it took him nine months to consummate his marriage. Obviously he got there in the end as they now have children and not through adoption or IVF as far as know. Alan’s experience is the exact opposite of a normal, functional heterosexual male.

We regularly hear from Christian people like the Salt Shakers, the Australian Christian Lobby and Fred Nile saying that homosexuality can be cured and that 1,000’s have ‘left’ homosexuality but it seems these people must have created their own closet as no one can find them. Christian groups and individuals are quick to put their own spin on studies like this. They did it when Warren Throckmorton’s documentary “I Do Exist” (stories of ‘ex-gays’, who got married” indicating they were now ‘straight’) was released. It seems that the premise of the documentary was false and a better title might have been “I’ve Heard You Exist (but haven’t found you yet)”. Throckmorton has no intention of redoing the documentary and when asked the question “Should religious groups show this film as a means of saying complete change of attractions is possible for all? His answer is “NO. I do regret that the video was used as a part in the culture war surrounding homosexuality. I regret any perception that change is certain or easy. In fact, I now believe durable change in basic attractions is very infrequent”.

The same thing happened when the Spitzer 2001 study Can Some Gay Men and Lesbians Change Their Sexual Orientation? was released. Conservative Christian organisations misused his study so much he had to make a public declaration that he was at odds with these groups.

Dr Jack Drescher, psychiatrist and the foremost expert and scholar on GLBT therapy, concerning the Yarhouse and Jones study said, “I think the authors have a bias and I have a bias, Everybody has a bias. That’s why we have accumulation of data – and that doesn’t support their data. There are peer-reviewed studies in the literature and the sum of all the literature does not indicate these treatments are effective. If one study comes out that seems to contradict the bulk of the scientific research that proves that people can change – that’s interesting, can they replicate it?” 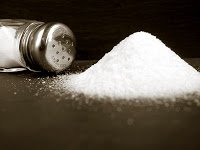 It is not unusual for groups like the Salt Shakers to twist the reports to suit their own agenda. I caught them out in September 2006 when their newsletter (1/09/2006) proclaimed “Homosexuals CAN change and they “should be allowed to do so” – says APA President. I had been following developments in the US and at that point the APA (American Psychological Association) had issued a statement about client self determination/autonomy and the therapists could work with people troubled about their sexual orientation on these conditions:

As you see this is nowhere near the bold claim made by the Salt Shakers “Homosexuals CAN change and they “should be allowed to do so”. I sent an email to them asking for a correction. They said they got the information from Lifesitenews, which is notorious for their extreme Christian views, but even their headline “APA President Supports Therapy Treating Unwanted Homosexual Tendencies was less misleading. Either the Salt Shakers are poor researchers and quick to jump on any anti-gay bandwagon or intentionally deceptive.

The Salt Shakers sort of made a correction in the next newsletter (15/09/2006) but it was hardly honest and never said ‘we were wrong’. It read as follows.

Pretty clear you would think, but not to those who have a personal agenda to normalise homosexuality and force society to accept it and believe it is innate. Which is no doubt why we were contacted by Anthony Venn-Brown from Sydney, He was very quick to point out that the APA has not ‘officially’ changed it’s position and that we should “correct” what we had said. Anthony was a Christian minister who chose to leave his wife, two daughters and the church some 14 years ago to follow his homosexual ‘inclinations’.

Venn-Brown also sent out a media release about this issue headed “Australia’s leading ex-ex-gay warns of the dangers”. It said, “American style exgay programs seeking to find a market in Australia are in for a fight, says Anthony Venn-Brown; his goal is to close the existing ones down.”

So much for choice and freedom in this democratic country. His words are a total denial that many people, who were once homosexuals/lesbians, are now living with a heterosexual identity as God made them. Many are happily married, and many have children. But there are none so blind as those who do not want to see!

The thing that concerns me the most about the false claims made from research projects like this is the impact this has on individuals and families. If you are in an anti-gay conservative Christian culture there is a dearth of knowledge about sexuality and enormous pressures to conform. When an individual is struggling to come to terms with their homosexuality this kind of irresponsible spin increases the likelihood of mental health issues, depression and suicidality.

Also Christian parents are given ammunition to reinforce their existing ignorance ‘see I told you, this study says you can change, it’s a choice’ and they put enormous pressure on their gay children to convert. They may even throw them out of the house when they accept being gay and come out. I know too many examples where all of these things have tragically occurred. Twenty to forty percent of homeless youth are LGBT and a quarter of those were kicked out when they came out.

In Australia, the most extreme cases I have come across, parents have paid for prostitutes to try and convert their gay teenager, spent $1,000’s to send them to the US for treatment or even locked them up and beaten them. Yes these have all occurred in Australian ‘Christian’ households.

What of course is tragically ironic is the constant claim these groups make about ‘upholding family values’ and their concern for the children when in truth they are the source of family break ups and such incredible damage in young people lives.

May God forgive them; because many of us are finding it extremely difficult.