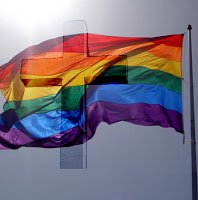 Can you be LGBT (lesbian, gay, bisexual, transgender) and a person of faith? Is there a deep sense of spirituality within the lives of people within our community?

The answer to both these questions is of course. YES!

Like many people, I used to believe it was impossible to be a Christian, Jew or Muslim and be gay and that spirituality was not of interest to anyone with the LGBT community. My perception was that it was a hedonistic, self-absorbed, sex-obsessed culture. How wrong I was.

For a long time most believed a person had to change their orientation because only heterosexuality was ‘normal’ and acceptable to God. Many of us from religious backgrounds took the path to ‘wholeness’ only to discover that even though we prayed, had faith and believed God could do miracles, for some reason this one eluded us.

Was the problem with God or us?

Surely it must be us we concluded. The conclusion that I must be a really bad person or I don’t have enough faith sent us down a path of further guilt, condemnation and self loathing……for some the end was tragic.

When I resigned from the ministry, 20 years ago this year, I only knew of two options. Heterosexuals can get to heaven if they are good and have faith, but homosexuals go to hell no matter what. It was like the ‘do not pass go, go directly to gaol’ card in the monopoly game. I didn’t know a single person who believed anything different. And even if there was, so strong were the years of conditioning that I would have thought they were into self-justification or deceived believers.

Like many people, I walked away from faith never expecting that I would return. But that often leaves us with a problem. We can be out about our sexuality but in the closet about our faith and beliefs. The faith/belief closet can be as toxic and damaging, full of unresolved issues, trauma, and fear as the sexuality closet; robbing us of an authentic life; our spiritual self remains in darkness.

When people come to me to seek help about the perceived conflict between their faith and sexuality, I let them know several options are available to them. They can reject their previous belief system, redefine it, adopt an entirely new belief system or integrate it. They need to work out which is the healthiest option for them at that time. So deep is the inner turmoil and cognitive dissonance, that for some, I suggest putting their belief system on hold completely for a period of time; maybe forever.

Not only has there been a change in societies understanding of sexual orientation this has also happened at a delayed rate within Christian circles. The delay is caused by ignorance, added prejudices and beliefs inherent in religions that say we have the truth.

A 2005 study ‘Mapping Homophobia in Australia’ showed there were still 35 percent of Australians who believed that homosexuality immoral. Whilst this is disturbing, it is a huge shift from what was once 100 percent. By 2009 that figure had dropped to 29 percent. Three factors contributed to the likelihood of homophobic attitudes, gender, age and religion. So, the most homophobic people in Australia are older, religious males. It doesn’t take much imagination to work out who fits that demographic when you know who are the vocal, main opponents in Australia to any request for LGBT equality? Hello!

Our only comfort is to know they are a dying breed.

Even in the deeply religious culture of America, shifts happen annually and attitudes and beliefs about gay marriage and gays serving in the military have changed. Recently, the question, ‘Should homosexuality be accepted by society?’ finally bumped over the 50 percent mark in the affirmative. Go USA!

The marketing principle is as true about society’s attitudes and concepts as it is about the introduction of a new product such as a personal computer or smart phone. Firstly, there are the innovators, then early adopters, followed by the early majority and finally the late majority and laggards.

In 1968, after the tragic suicide of a number of his friends, Troy Perry (innovator) gathered 12 people in his lounge room and had the very first meeting of the Metropolitan Community Church. It seems, Troy was the first person who dared to believe that there wasn’t a conflict between his sexual orientation and Christian faith. This was the birth not only of a denomination but of a revolution. Since then the number has grown to many, many 1,000’s (Google ‘Gay Christian’). The number of mainstream churches and denominations (early majority) who welcome and affirm LGBT people has grown exponentially over the last three decades and expanded to eighty-six different denominations across forty-six countries.

A survey of 9,000 gay, lesbian, and bisexual Americans showed that 60 percent say their faith is “very important” in their lives. Barna, a Christian and instigator of the survey, points out that the numbers demonstrate that “popular stereotypes about the spiritual life of gays and lesbians are simply wrong.”

“People who portray gay adults as godless, hedonistic, Christian bashers are not working with the facts, “Barna said. “A substantial majority of gays in America cite their faith as a central facet of their life.”

Barna’s data indicates that homosexual believers tend to avoid active participation in an institutional church, both anecdotal evidence and some research shows that gays and lesbians who are involved in their churches and denominations are often more committed to the church and more involved in ministry than their straight brethren. Many of course have to live in a Don’t Ask – Don’t Tell culture but they remain committed to the faith and church that means so much.

In our Freedom 2 b[e] online community (Telling Our Stories), what took decades for some of us to sort out, we have young people who have resolved faith/sexuality issues at 15 and 16. Others have come back into faith later in life; feeling the need to reconnect with their spirituality and that they possibly had thrown the baby out with the bath water. Some have taken on less structured and formal beliefs, adopting meditation of other spiritual practices. Mix in the right circles and it’s not hard to have an in-depth, meaningful conversation about spirituality with an LGBT person.

One thing I have found fascinating, is the number of community leaders I have met who came from faith backgrounds. Some were ministers, missionaries, church leaders and left the faith; no longer able to live in a world that viewed them as the ultimate sinner. Others were outed, shamed and forced to leave. Interestingly, they have continued to live their core inner values of purpose, service, making a difference and justice, no longer attending a church or belonging to a particular religion…….but serving our community.