Read about the success of this campaign here  and here 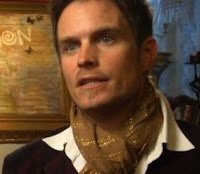 An American ex-gay preacher, invited to speak in some Australian churches (Miracle Christian Center’s), is learning his message, that God ‘cures’ people of homosexuality, is not welcome in this country. One of the venues booked for his talk has withdrawn permission to use their premises. The venue originally booked was St Columbian’s Catholic College in Caboolture Queensland.

Possibly things have changed more in Australia then we realise with the principal of the school stating on their site that “St Columbian’s College is a caring, inclusive community, and we will not allow our facilities to be used by those seeking to promote views which are not in line with the Catholic Christian ethos of our community”.

Adam Hood, a self professed former homosexual, gained some notoriety last year when videos were released claiming that he was once an extravagant, card-carrying gay man, living in San Francisco with a handsome boyfriend whilst heavily involved in drugs and Satanism.  Hood tells the interviewer he has now been delivered from homosexuality and when he first had sex with wife he screamed “Jesus” because he loves women and his wife’s body.

Many had difficulty believing Hood’s story and originally some thought the video was a joke. Hood squeals, flays his hands about and is dressed like a flamboyant interior designer who has no qualms letting everyone knowing he is gay.

But Hood gets down to the core of his message. ‘Homosexuality is an abomination. It’s a sin God will dam. If they stay in that sin they will be dammed to hell and rightly so because they need to be quarantined. Homosexuals are straight up lost. Lost because they didn’t have fathers or were sexually abused by some man. Homosexuality is one of the worst forms of depravity.”

Anthony Venn-Brown, co-founder of Freedom 2 b, who has helped many former ex-gays, says this seems like a last ditch attempt for American ex-gay groups to try and claw back the ground that has been lost here in Australia over the last decade. Venn-Brown went through Australia’s first ex-gay program in the early 70’s but like so many who originally went down that track, is now living as an openly gay man and assists ex-gay survivors find resolution from what he calls ‘years of unnecessary torment’.

“The ex-gay message in Australia and other parts of the world is being watered down and becoming more and more redundant. The message Adam is preaching is extremely outdated. This was the message of the ex-gay movement in the 70’s. Once they realised it didn’t work the message changed and here in Australia there is not one group I know of who would boldly claim they can make the gay go away”. Venn-Brown said. They have had to change their message because the reality is no-one changes their sexual orientation even if they do get married and have children. Through telling our stories, former ex-gay leaders apologising and sharing their new perspectives, the support of Pentecostal and Evangelical church leaders, we have changed the landscape here. Ex-gay ministries are in decline in Australia.  Even Exodus International’s Senior Director of Church Equipping & Student Ministries, Jeff Buchanan, told The Christian Post last week, “In no way shape or form is our message about trying to cure or do we try to promote that type of methodology or message.”  Venn-Brown added.

Paul Martin, an openly gay man, psychologist, and former ex-gay leader himself, blew the whistle on Hood’s visit when he was contacted by a troubled student about the upcoming event in Caboolture.

“Nobody I met whilst being a leader in the Exodus movement actually changed and the people who were married would end up telling me that they’d created a private hell as they hadn’t changed at all, and lived in a state of permanent distress. The potential psychological carnage that can come out of these seminars both indirectly and directly is palpable. I’ve spent over 20 years counselling survivors of these groups, some who attempted suicide.” Martin said.

According to Venn-Brown, Miracle Christian Centre is a fringe Pentecostal group which have set up an independent network away from mainstream Christianity which is probably why they invited Hood.

Venn-Brown concluded “Australian society has become more informed about sexuality and accepting of gay and lesbian people. Adams message is not only irrelevant and unwelcome…. it’s damaging. We refuse to go back to our days of ignorance. Please enjoy our beautiful country Adam but don’t pollute it with your toxic message of self loathing”.

Hood is currently booked to tell his story in community halls in Melbourne hired by Miracle Christian Center this weekend. The gay community it asking the councils responsible for hiring the venues, to follow the lead of St Columbian’s College in Caboolture.

We ask all LGBT people, their family and friends to email the Mayors of Dandenong and Prahran, respectfully requesting they do the same.

Please make sure that communication is rational and non-hateful……unlike Mr Hoods message.

Below is my email to the Mayors as an example.

I have attached a press release I have just sent out about Adam Hood who I am sure you are aware of now is speaking at a venue hired out by your council this weekend.

You may not be aware of the ex-gay movement or its message that Mr Hood represents. Basically it is that homosexuality as an orientation is flawed, gay and lesbian people go to hell and that if people turn to Jesus then they can go from gay to straight.

I have been working in this area for many years with people who have been through programs after adopting the ex-gay message. Great harm is experienced by people in these situations including mental health issues attempts to suicide and we know of too many cases where some have succeeded in taking their own lives. This is a great tragedy.

As the Mayor of …………, can I please respectfully ask that the council look into this and cancel the proposed use of the venue this weekend as has already been done by St Columbian’s Catholic College in Caboolture Queensland..

Australia is a country that has moved on from its ignorance about sexual orientation and the message Adam is preaching that being gay is a sin and that people can change is not only false but incredibly damaging to those who are struggling coming to terms with who they are.

An Ambassador for the LGBT Community