Moratorium on the Westboro Baptist Church

Home/Church, General/Moratorium on the Westboro Baptist Church
Previous Next

Moratorium on the Westboro Baptist Church

Images of the Westboro Baptist Church remind me of Grant Woods America Gothic or of fugitives from the set of the Beverly Hillbillies. Fashion sense? They have none but their dress sense indicates they are not people from a big city.  Rural, middle America is where they reside.

You’ve seen photos of them in the gay press, on websites, YouTube, Fox News, BBC, CNN, ABC, the Chasers War on Everything, Michael Moore documentaries and even a cameo appearance in Bruno. Attention that any media whore would envy.

When you read of their antics, disgusting and abhorrent are words that immediately come to mind. They are banned from entering some countries along with known terrorists.

Strangely enough though, they would be aligned with some in the LGBT community as they have protested against the Pope, Catholic Church and the late anti-gay, Jerry Falwell, often called the father of the Religious Right. Falwell responded by calling their leader ‘a first class nut’. 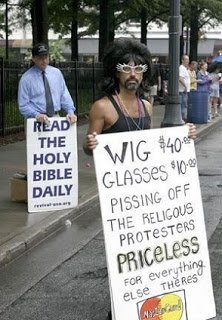 They are not only anti-homosexual, they seem to be anti everything including anti-Sweden, anti-Australia and have labelled President Barrack Obama the anti-christ. Even I get a mention on their site as an Australian poster boy for sin along with Heath Ledger, Darren Hayes and Peter Allen.

How faaaaaaaaaaaabulous to be in the company of such well known names. As lawyers initially, they fought for equal rights for African Americans who had experienced racial discrimination and tried to sue President Ronald Reagan for appointing a US ambassador to the Vatican. The basis of their action; the need for a separation between church and state. Somewhere along the line they went off the rails or maybe they were always obsessive intense activists who just happened to begin using that for good causes.

The LGBT community became aware of them when they began picketing funerals of men who had died of AIDS carrying offensive signs like ‘God Hates Fags and ‘’AIDS is God’s Answer to Homosexuality’. 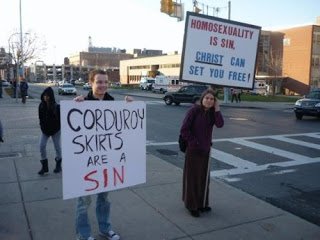 Unfortunately what most people don’t realised is that the Westboro Baptist Church is nothing more than a Christian cult of less than 100 people who should be relegated to the category of fruit cakes along with the tiny number of snake handling churches found in similar parts of the US. There is a huge gap between having faith and being mentally unstable. Although maybe it is only a fine line for some.

Don’t be misled, these people are not stupid. Fred, the leader, is a disbarred lawyer and his children practising lawyers. They are idiots but not unintelligent. 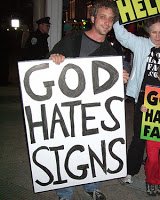 What I can’t understand is why  the Westboro Baptist Church are given  so much media attention. Why do we respond to their insanity? Do they represent Christianity or speak on behalf of the Christian church? I think not!

I doubt that Fred Nile of the Christian Democratic Party, Anglican Archbishop of Sydney Peter Jenson or Roman Catholic Archbishop George Pell would condone the language or activities of the group…..although they may be aligned with the sentiments.

The Westboro Baptist Church and snake handlers are fringe, extremist groups that bear little, actually, no resemblance to genuine Christianity. When you read the gospels, you read of Jesus opposing the religious bigots and their hypocrisy. In fact, he never sought them out to confront their stupidity. Obviously Jesus believed His time could be spent more productively. They followed Him around like a bad smell, constantly being living examples of the contrasts between Jesus’ message of love and acceptance versus the Pharisees’ preaching of judgment and condemnation.

Some would argue that freedom of speech is a personal right in a democratic society and that everyone is entitled to an opinion. In one of the many legal cases against the group, U.S. District Judge Richard D. Bennett,  stated in his instruction to the jury that the First Amendment protection of free speech has limits, including vulgar, offensive and shocking statements, and that the jury must decide ‘whether the defendant’s actions would be highly offensive to a reasonable person, whether they were extreme and outrageous and whether these actions were so offensive and shocking as to not be entitled to First Amendment protection.’

What influence does their message and antics have? Are people swayed by them in any way? I think not. Does the Klu Klux Klan gain converts by wearing hoods and burning crosses? It’s unfortunate that such groups exist but they do. Unfortunately, extremism is something we have to live with; in the spectrum of this thing we call the human race. 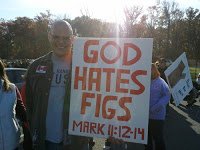 But do we have to give them exposure, a voice and create a celebrity status by constantly reporting on their activities and using them as examples of Christian beliefs about homosexuality? Responding to them in any way gives some level of credibility to their insanity.

Ignoring them, certainly won’t make them go away but it won’t give them the thing they crave; attention. From now on let’s remind ourselves that the God Hates Fags group are a dying breed of ignoramus’s by not mentioning them or using them as examples of religious hatred. There are enough of those already. Let’s have a moratorium on God Hates Fags and the Westboro Baptist Church!Haven’t we got more important issues to devote our time and energies to? 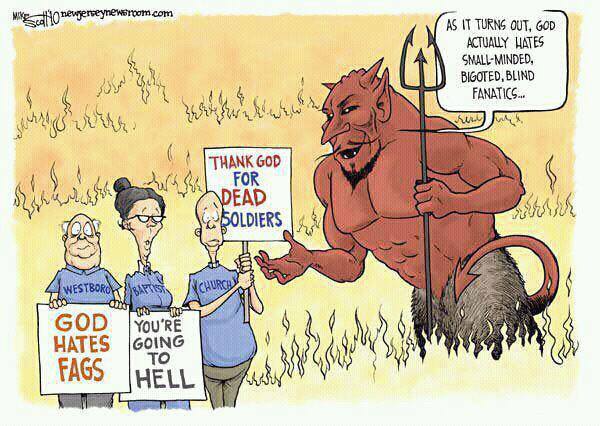 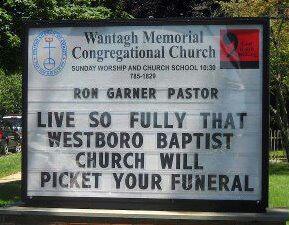