Can you be a Christian and gay? Can a person change from gay to straight? ABC’s Hungry Beast looks at gay conversion therapies. Anthony Venn-Brown, former high profile preacher in Australia’s mega-churches such as Hillsong and Anthony Menchetti talk about their ex-gay experience. Haydn Sennitt pastoral worker for Liberty Christian Ministries, who works with people who have ‘unwanted same sex attraction’, talks about leaving his gay life and hopefully becoming straight.

You can share this on social media using the buttons below

Reporter Monique Schafter speaks to three same-sex attracted men whose Christian beliefs led them to attempt to reorient their sexual compasses through various ‘gay conversion’ techniques. One claims to have succeeded while another had an affair with one of his program team leaders.

Haydn, 29, is a devout Christian who admits to still having a sexual attraction to men despite being married with two children and leading a ‘heterosexual life’. Haydn believes his faith continues to ‘heal’ his broken sexuality which is a result of a fractured relationship with his father. Haydn works through his ‘problem’ through prayer, abstinence and spending time with other heterosexual males to make up for the lack of connection between him and his father. He says:

“I’ve had same sex attraction to men but it’s something that I see as an orientation that does not define me… It’s not who I am. I see it as being a spiritual regeneration as I trust God with my sexuality. He regenerates and changes me.”

Formerly a leader in the Assemblies of God and regular preacher in mega-churches of Australia and overseas, Anthony Venn-Brown (59) tried a variety of methods over 22 years to change his homosexuality:

“I think I tried probably everything possible to become heterosexual. There was lots of personal prayer, counselling, I went through a live in ex-gay program for six months, I went through exorcisms, I fasted for 40 days twice and I was married for 16 years. So when people say to me ‘you didn’t try hard enough’ I want to hit them.”

Anthony (59) is the co-founder of an organisation that offers support, information and contacts to GLBTI (Gay, Lesbian, Bisexual, Trans, Intersex) people from Pentecostal or Charismatic backgrounds, many of whom are ‘ex-gay survivors’ (the term used for people who have gone through conversion therapy but have come to embrace their sexual identity as lesbian, gay, bisexual or transgender). He has also written an autobiography, A Life of Unlearning, about his journey to find the truth that has inspired many same sex attracted people to live authentically, while retaining their Christian faith.

When 33-year-old Anthony came out to his very religious parents as a teenager they sent him to gay conversion therapy run by the Riverview Church in Perth. After months of guilt-ridden therapy and being told there was no such thing as a happy, monogamous gay relationship, he had an affair with one of the team leaders and left the program. He is now in a long-term relationship with his boyfriend.

“I did slip up during [gay conversion] therapy. I had an affair with the team leader. Coming out of it and living the life I live now… I just can’t believe I ever did that.”

Their stories can be seen on Hungry Beast this Wednesday night at 9pm on ABC1.

Immediately after the program, Haydn and Anthony (59) will join with Monique Schafter to discuss gay conversion in a live forum on the Hungry Beast website. Go to www.abc.net.au/hungrybeast at 9.30pm on Wednesday 24 February to join in the discussion. 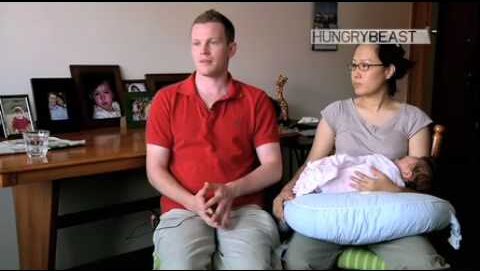