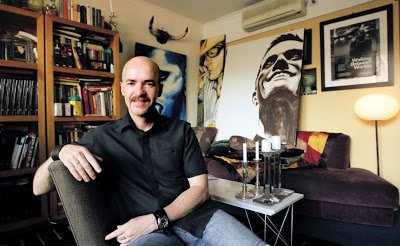 For almost a decade Iain Wallace led a double life. During the week, he was a devout evangelical Christian, an art teacher and head of senior school at Charlton Christian College, near Newcastle. On weekends he became Alex, a gay graphic designer who met men on the internet and dated them at Sydney nightspots.

Finally, in 2002, something broke. A colleague gave him a card with a picture of a rose bud and the words: ‘‘Then a day came that it was too difficult to stay tight in a bud.’’ Wallace had attempted suicide the day before and the message touched a nerve. ‘‘She gave it to me for no reason and I just started crying,’’ says Wallace, who attempted suicide six times during his 10-year struggle to accept his sexuality. ‘‘She said: ‘Iain, what the hell is going on with you?’ I thought, ‘I need to find someone I can trust’. ’’

That day, Wallace confided in a close friend. But such was the strength of his conservative faith that it was another four years before he came out. In December 2006, he gave notice at school and on his last day, delivered a coming out speech to staff and students at morning devotions. In his speech, Wallace said: ‘‘I have been involved in Christian education for over 15 years. I find myself in a strange situation where as a gay Christian in a non-inclusive Christian environment, I feel a little like the character Eliza Doolittle from My Fair Lady where she is from a working-class background but trained to mix with the upper class. Towards the end of the story Eliza discovers, to her horror, that now after her training … she doesn’t appear to fit in either group! I have come to the same horrifying conclusion that I don’t really fit in.’’

The next day he told his friends and family. The following day, he sent an email to everyone in his church. ‘‘I was very nervous,’’ recalls Wallace, now 40. ‘‘But I decided to rip the Band-Aid off really quickly. Had I just slinked off, people would have found out and made their own judgments and come to the wrong conclusions. I gave the exact same message to everyone. At least it was my words, my message.’’

Two years on, Wallace is rediscovering a more spiritual faith. He is working full-time as an artist and living in Redfern in a committed relationship with his new partner, architect Craig Casey.

To celebrate his journey, Wallace has created an exhibition of photographic works, Walking Between Worlds, which will be

Opened on February 15 by former High Court judge Michael Kirby. The exhibition, at Trumpet Gallery @Imagine in Surry Hills, features 20 photographs of gay and lesbian Christians who have charted the rough waters between their faith and their sexuality. Among the portraits is gay Christian leader Anthony Venn Brown and Justice Kirby. Also featured are straight Christians who have supported the gay community, such as Mike Hercock, a Baptist pastor with the Hope Street community project in Darlinghurst, and Sue Skuthorpe, principal of Charlton Christian College. ‘‘She was so loving to me when I came out,’’ says Wallace. ‘‘She said: ‘Whatever journey you have to take in your coming out process, I’m there with you.’ And that is not a common response.’’ Indeed, Wallace received hate mail from some friends. Some told him he was going to hell. ‘‘Most people said: ‘We know Iain, we love Iain and we’re going to continue loving Iain.’ But there were a few people who fell by the side of the road. Strangely enough it was two of my closest friends. I was very saddened by that but there were so many other people celebrating my life and that made it easier to move on.’’

The most enduring support came from Anthony Venn Brown. It was not until he read Brown’s A Life Of Unlearning that Wallace began to accept that homosexuality and Christianity were not mutually exclusive. ‘‘Until I read that book I thought I was the only one,’’ he says. ‘‘It seems silly now because it’s a very common story.’’

At Venn-Brown’s urging, Wallace attended support group for gay Christians, Freedom 2 b[e], where he found others walking similar journeys. And when he posted his coming out speech on the Freedom2B[e] website, an old student from Charlton College read it and replied. ‘‘I knew from the moment I met you that you were gay,’’ the student wrote. ‘‘I often wondered why it was such an issue and feared the hatred, and so went into hiding, as you did. It saddens me that people have to hide themselves. I am sorry for the time you have lost in this struggle. I think it is amazing that you are so brave to confront this issue in such a public way.’’

It is for young Christians like this that Wallace has created the exhibition. Also featured in the show is David Glasheen, an openly gay Hillsong member, now in his early 30s. In his early 20s, Glasheen confided to a friend that he was attracted to men. His parents found out and Glasheen felt his only choice was to throw himself off a bridge in the Blue Mountains.

‘‘He broke most bones in his body and was in hospital for 18 months,’’ says Wallace. When a psychiatrist asked him why, he said, ‘‘Well because I’m gay’’. The psychiatrist said: ‘Is that all? Well, there’s absolutely nothing wrong with that.’ It was the first time he had heard that and so he spent his time in recovery processing it.’’

It is this same message of hope and acceptance that Wallace hopes to send via his exhibition. ‘‘There are too many sad stories, too many people struggling in shame and silence, and too many people who think they are the only ones,’’ he says. ‘‘I hope this exhibition will connect with people, so they realise there are people out there who will support them.’’