Nurture or Nature – Does it Matter?

Nurture or Nature – Does it Matter? 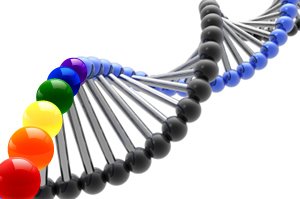 Only last week, Australian researchers identified a significant link between a gene involved in testosterone action and male-to-female transsexualism, which opened up the debate for some regarding homosexuality as well. Is it genetic/biological (nature) or are gays, lesbians and transgender people created by the environment they are bought up in (nurture)? (let’s blame the parents)

There is no gay gene!

Of course not, yet we see this statement repeatedly mentioned in anti-gay Christian books and frequently sprouted ad infinitum by right wing Christian activists. This statement ‘there is no gay gene’ is meant to reinforce their stand that homosexuality is caused by bad parenting or sexual trauma and all we need to do is heal the homosexual of his or her illness/dysfunction. But of course science has already shown that there are numerous biological factors that impact whether a person becomes gay or straight.

Statements like ‘there is no gay gene’ from Christian groups, only reflect a poor knowledge of science. Ask any biologist to identify the gene that makes a person heterosexual and they will laugh at you. Surprisingly, there isn’t a gene for that either. Our sexual orientation and gender are determined by the complexities of genes and hormones whilst in the womb and are activated at various times in our development prenatally through to puberty.

Whether it is natural or caused by environment is not the real issue. The real issue is that in a world where we have different cultures, races, personalities, skin colours and religions, the human race thrives through acceptance, tolerance and even celebration of diversity; not by one group claiming superiority over others.

In the days of colonialism, certain civilisations considered themselves superior and conquered other nations. No one would dare suggest today that western culture is superior to African, Asian or Eastern. Some might think that, but that thinking comes from their ignorance of those cultures and blindness to the glaring flaws in western culture. Ignorance was recently made embarrassingly obvious when Sen. John McCain’s candidate for the vice presidency, Sarah Palin, was asked by ABC News’ Charlie Gibson about her credentials for creating an informed foreign policy.

Gibson: What insight into Russian actions, particularly in the last couple of weeks, does the proximity of the state give you?

Palin: They’re our next door neighbors and you can actually see Russia from land here in Alaska, from an island in Alaska.
Scary, very scary.

“We got it wrong, those homosexuals are okay” (paraphrased circa 1956) Dr Evelyn Hooker

Up until the late 40’s and early 50’s mental health professionals had a very warped view of homosexuality as the only saw gay men who were tortured by their sexuality. If you were a gay male in those days you’d do everything possible to change your sexual orientation as it meant you’d be sent to prison or subjected to barbaric forms of aversion therapy. Lesbians rarely sort help as it was not a criminal offence.

In her landmark research, Dr Evelyn Hooker interviewed 60 homosexual and heterosexual men not in therapy, using well-established psychological tests. These profiles were submitted to three experts in the field of assessment to see if they could identify the differences. The experts couldn’t differentiate between the mental health and adjustment of the two groups. Nothing made the group of homosexual men stand out at being abnormal. The profiles of both gay and straight men were identical.

Dr Hooker’s paper was presented in 1956 and her further studies contributed to a change in the attitudes of the psychological community towards homosexuality. Eventually, in 1973, the American Psychiatric Association removed homosexuality from its handbook of disorders.

So I guess this brings us back to my original question. Does it matter if a person is gay or lesbian because of biological factors or upbringing? Since a person’s sexual orientation doesn’t cause any harm to them or to others the answer is NO!

Through scientific and technological advances, maybe one day we will understand the entire biological intricacies of gender identity and sexual orientation. But ‘til then remember, heterosexuality is not normal, it’s just more common. We are all normal and as human beings who live, breath and contribute to our communities, societies and churches, all should be treated with dignity and respect.