A young man, who’d recently accepted his sexuality was being forced to go and have at least one session with a Sydney based ex-gay leader. He asked me if I could help him come up with some questions to ask. The 20 below are what I came up with.

There are some extremely pertinent questions (which are inappropriate to put on my blog) that can be asked of an ex-gay ‘married’ person about the sexual behaviours with their spouses; practices that most heterosexuals would enjoy but would be uncomfortable, or even repulsive, to many same-sex-oriented people. When asking such personal questions, of course the person would protest that what they and their partner did behind closed doors was none of my business. To which I would reply “Exactly, I agree these are very offensive questions. So why do you feel it is your right to talk about the way my partner and I make love behind closed doors and label it disgusting, perverted or sick. Surely the intimacies of our love making in private is no ones else’s’ business but ours”.

I would like to thank the Australian “ex-gay” leaders who have come to the place of honestly acknowledging that the goal is not to become heterosexual and that the gay never actually goes away. Your honesty has helped people make a more informed decision about how they will live their lives. 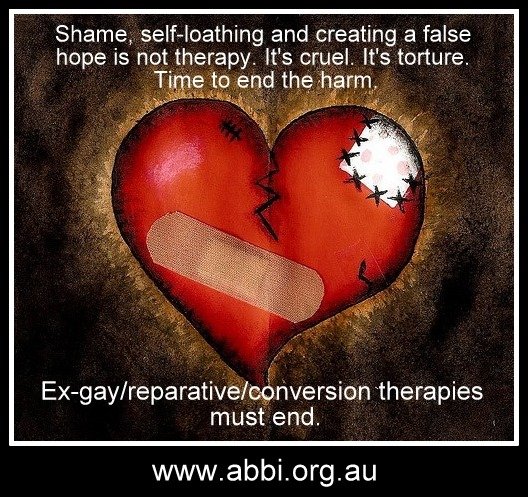