A Crack in the Wall

Home/Church/A Crack in the Wall
Previous Next

A Crack in the Wall

Like the crack in a fortress after an earthquake, every now and then a cataclysmic event opens the way for social transformation. On

e such event happened last week when Baptist, Churches of Christ, Pentecostal and Anglican ministers began signing a document that said: “We recognise that the churches we belong to and the church in general, has not been a place of welcome for gay, lesbian, bisexual and transgender (GLBT) people. We are deeply sorry and ask the forgiveness of the GBLT community We long that the church would be a place of welcome for all people and commit ourselves to pursuing this goal.”.

This is not a misprint. Christian ministers and leaders are repenting of a wrong attitude and asking the gay community to forgive THEM!

The group responsible for this apology has been named 100 Revs. One hundred ministers have signed the statement and will march in the 30th Anniversary of the Mardi Gras parad

e this year, to show it’s not just empty words. For some, like the Rev Fred Nile, the apology is going too far and marching in the parade, is total blasphemy.

Two Opposing Camps The majority of the GLBT community, justifiably, see the church as the enemy. Some Christian groups oppose every move for gay equality. Certain preachers regularly speak of gays and lesbians in terms of depravity and perversion, maintaining they have a conspiracy to break down the fabric of society and convert children. Some Christian leaders in the US declared that catastrophes such as 9/11 and hurricane Katrina were God’s judgement, because of homosexuality. In some denominations, gays and lesbians are told their service is not wanted. Permission is granted to sit in the pews though so long as they don’t fall in love with someone of the same sex and remain celibate. Of course, full rights and privileges would be restored if they prayed hard enough and experienced a second conversion: from a homosexual to heterosexual orientation. It happens every Sunday, like people miraculously jumping out of wheel chairs

Year after year, we hear the same message from the relentless opponent of the gay and lesb 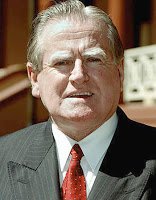 ian community, the Rev Fred Nile. In 2006, when announcing that “concerned Christians” would be carrying a seven meter banner saying “God Forgive Sydney” Rev Nile said, “Almighty God the Creator faces two conflicting options – to punish those who deliberately sin and blaspheme, as occurred at Sodom and Gomorrah; or to exercise love, mercy and forgiveness so as to allow time for the Mardi Gras participants to repent of their sin”. Punish or forgive, it’s a tough decision. Apparently, Fred Nile’s God can’t make up his mind.

Each year, Fred Nile finds something to condemn to get media attention. Last year he issued a decree against me and the Freedom 2 b

[e] group joining the parade for the first time saying. “I call upon Anthony Venn-Brown and these marchers to withdraw from this blasphemous, obscene parade and not bring the Name of Jesus Christ into disrepute. They should also repent of their homosexual sin, as have many homosexuals.”

Is this the attitude the 100 Revs are apologising for?

When the media announced the 100 Revs apology last week, Mr. Nile, in one of the worst examples of political posturing and shabby research, accused the 100 Revs of using the Prime Minister’s apology to indigenous Australians to “unashamedly cash in on the wave of public sentiment”.

His media release continued “Sections of the Homosexual community and an alleged group of so-called ‘Church leaders’ have endeavoured to make a mockery of the suffering of the Aboriginal community by calling for an apology from the Christian Church because it doesn’t happen to condone or embrace their sexual activities exactly as they wish. It’s upsetting to think that some would seek to detract from the event by pushing their own political agenda. They should be ashamed”.

Possibly, it is Mr. Nile who should be ashamed, for assuming that his fellow ministers, the 100 Revs, would intentionally hijack a deeply transformational moment in people’s lives and our nation’s history. If the upholder of godly standards and truth had spent time asking questions instead of making judgements, Mr. Nile would have discovered that the 100 Revs concept was birthed in March 2007, long before the change in government or the possibility of a Prime Minister saying “Sorry”.

The 100 Revs have never claimed to represent the church. “We ARE a group of Christian ministers who voluntarily and individually bring this apology. We ARE NOT official representatives of our churches or denominations,” the statement says. Thank God, Mr. Nile does not represent the Christian Church. If you attend one of his Christian Democratic Party luncheons, it is quite clear he only speaks for a small minority. The musty smell of clothes that have been closeted too long is quite overwhelming and the average age is 65. The CDP’s support base grew up in the era before research on sexual orientation and when homosexuals were imprisoned. They are a dying breed.

The 100 Revs statement is a new voice. It’s a refreshing voice. It’s honest and reflects humility.

Gays on the doorstep

Primarily, the apology has come about because someone listened. Pastor Mike Hercock, spokesperson for the 100 Revs and pastor of Surry Hills Baptist Church, has a unique parish. Based in the postcode of 2010, his demographic includes 35% who identify as gay, lesbian and transgender and has the highest number of HIV+ infections in Australia. Unlike some ministers who prefer to wait for people t

o come through the church doors, Pastor Mike sought to reach out to the community he feels called to. With a restaurant, bar, drop in centre for sex workers and transition residences, supporting the homeless to rebuild their lives, it’s obviously not your average church. “If I don’t have at least 35% GLBT people in my congregation then I’ve failed to reach my community,” Pastor Mike said.

In getting to know the gay and lesbian people in his neighbourhood, he came across the group Freedom 2 b[e] which was set up to support gays and lesbians from Pentecostal and Evangelical backgrounds to resolve faith and sexuality issues. Friendships developed and Pastor Mike listened to their stories. Most had lost faith, and had been rejected by friends and family because they were gay. Church leaders, ignorant about sexual orientation, automatically condemned these people and pressured them to do the impossible. ‘Become straight!’ Some had quietly slipped away from the Christian life they had loved, believing their faith and sexuality was incompatible. It was hard to find a person who had not suffered substantially either emotionally or psychologically. Many were still carrying the hurt even though they’d left the church years ago. The great surprise was, that even after all they had been through, some still had a faith.

Pastor Mike already knew of tragic suicides that had occurred because of the rejection and alienation. Studies have shown that gay and lesbian youth are four to six more times likely to commit suicide than their heterosexual peers. “I have no doubt that our lack of love and compassion may have caused some significant kind of mental health issues for people.” Mike told the ABC.

Pastor Mike and the 100 Revs have already received criticism from peers and leaders because of the apology, but the Jesus they are representing was also a person accused of going to wrong places and mixing with the wrong people. Anyone who has read the Gospel accounts knows that the law-obsessed Pharisees were relentless in their attacks on the man who came to show the way of love. They lost their power when Jesus simply reduced their multitude of laws and rules into two. “Love God with all your heart and do unto others as you would have them do unto you”.

Religion or ChristianityA reading of Matthew chapter 23, in a modern translation, is chillingly close to the bone for church hierarchies that have never taken the time to really listen but only condemn. When Jesus spoke to the religious leaders who strictly followed every single commandment in the Old Testament he said ‘You’re hopeless, you religious scholars and Pharisees! Frauds! You keep meticulous account books, tithing on every nickel and dime you get, but on the meat of God’s Law, things like FAIRNESS AND COMPASSION AND COMMITMENT—the absolute basics! – you carelessly take it or leave it. (Matthew 23:23 Message Bible). They were always quick to throw stones.

Possibly human nature has not changed much in 2000 years. On one hand, we see a group of Christian leaders reaching out to a community and willing to acknowledge that their attitude and behaviour has not reflected the Jesus they seek to represent. From other religious leaders, we consistently hear accusations, condemnation, and judgement. The “issue of homosexuality” is endlessly debated and dividing some Christian denominations. The 100 Revs have realised homosexuality is not an “issue”…..it’s people.

If Australians had to choose what brand of Christianity to follow the choice is becoming increasingly clear. They are intelligent enough to see one fixated with rules, regulations, exclusion and becoming increasing irrelevant and the other reaching out with love and compassion desiring to make a difference. Tough choice eh?