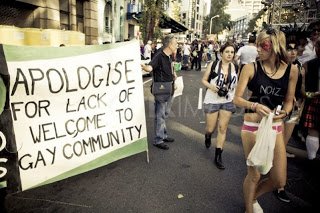 As the 30th Anniversary of Sydney Gay & Lesbian Mardi Gras quickly approaches, the 100 Revs project has generated a great deal of controversy. Initially conceived 12 months ago, the 100 Revs, is a group of Christian Ministers who are signing a formal apology to the GLBT (gay, lesbian, bisexual, transgender) community, which states, amongst other things, that churches have often been “profoundly unloving”, and unwelcoming, then finishing with the words, “We are deeply sorry and ask the forgiveness of the GBLT community”. Some signatories are facing denominational dismissal by marching in the parade.
Ministers have been pressured and some even threatened because they have dared to be honest and say that the churches attitude and approach has been in conflict with the example of Jesus Christ. We know it’s illegal to discriminate in this country on the grounds of sexual orientation, I wonder if its illegal to discriminate against someone who associates with the gay community.
Meanwhile, some people are trying to shut the 100 Revs down. To be expected, there is another group who wearily trot out what have become known as the six “clobber passages” from a Bible of 31,173 verses. Their posts on various sites contain words of condemnation and judgement of the 100 Revs and gays in general, no love, no compassion, no grace (which of course is what the apology is all about).
Read below three things you can do to make sure this project is not closed down but achieves its objectives.

THINGS TO DO:
HERE ARE SOME COMMENTS PLACED ON THE 100 REVS BLOG OPPOSING THE PROJECT
Natasha said…
Homosexuals cannot enter heaven (1CORINTHIANS 6:9). WITHOUT REPENTANCE OF THE SIN OF HOMOSEXUALITY THERE CANNOT BE COMMUNION WITH JESUS THE TRUE GOD. GOD’s WORD IS CLEAR IN THE BIBLE. Homosexuality can be cured through repentance and prayer. I too was once homosexual until I saw the light that is Jesus of Nazareth. Through him all things are possible including abandoning homosexuality
Anonymous said…
Leviticus 18:22, Leviticus 20:13 , Romans 2:2-8 , Romans 1: 18-22, 24-26 , 2 Peter, 2:4-6,17 and Genesis 19: 1-4. Deliberate homosexual acts are gravely sinful. They violate God’s law and they violate our very humanity, misusing the faculties He entrusted us with, such as our sexuality and our pro-creative abilities. Homosexual acts are a grave depravity and intrinsically disordered.

Peter said…
Yet the Bible speaks of homosexuality as a sin from Genesis to Revelation. You cannot show me anywhere in the Bible where it says ‘a man lying with another man is not sin’. Even if you do not act out your homosexuality I would remind you that Jesus also said of adultery ‘what you do in your heart and mind is the same as if you actually did it. Identifying as a homosexual is an act of the will. Identifying as a thief is an act of the will. Both need repenting of.
Concerning marching in the parade Jenny said…
Regardless of your intention, (by marching in the parade) the perception will indeed be one of affirmation of Mardi Gras and what it stands for, which is, in case you missed the point, the promotion of homosexuality as NORMAL. That has always been the basis for Mardi Gras – “we are proud to be homosexual” – acceptance goes without question. If you do not intend to normalise and give acceptance to homosexuality then cancel this whole venture now – before you naively do something you will long regret.

There still is NO evidence anyone is born a homosexual despite what Anthony Venn-Brown ‘thinks’. Ask him for the evidence – there is none. The APA has made politically correct, not scientific, judgements – many people have left the lifestyle and become heterosexual, again, despite what AVB might infer. Self justification is a powerful deceiver!
(AVB comment: Apparently I’m not the only one who seems to ‘think’ that same sex and opposite sex orientation comes about from genetic, hormonal, biological influences. Read here & here)
Reverend Fred Nile said:
“The church has always reached out to homosexuals and many have been converted, particularly in recent years and have become active members of the church. The church is loving to all individuals and all groups, but it can’t compromise on biblical truth as revealed by the creator .In the beginning God created Adam and Eve, not Adam and Steve.”
(AVB comment: the tired, hackneyed cliché “God created Adam and Eve, not Adam and Steve” reflects an understanding of reproduction but an ignorance of sexual orientation. It was reported that one Sunday morning after Cardinal Pell, the Catholic Archbishop of Sydney, had been speaking about the evils of homosexuality, a little old lady quizzed him as she exited the church. “Cardinal Pell, we know that God made Adam and Eve but if God didn’t make Adam and Steve, then who did?” Silence!
Anonymous said:
Homosexuality is an abomination against GOD first and foremost and is detrimental to one’s health as regards the AIDS virus.
The AIDS virus originally was named the GRIDS virus following the revelation that homosexual people tended to attract the virus with their debased practices. So a homosexual can’t escape being condemned by the Bible as being abominable and is deserving of death as Paul points out in Romans 1 and Leviticus 20 espouses that homosexuals need to be gotten rid of via execution. There is no escape for those who practice such things and get away with them. Homosexuality is outlawed in the Bible and it is high time that all Christians affirm that homosexuality is a crime of the first degree and must be punished in our society and must be eradicated out of our lives.

What saddens me is that although these people are a dying breed within the church they are vocal and active, screaming out words that will continue to have a damaging impact on young lives in Christian homes and youth groups. Unless of course there is a stronger, louder voice of sanity from those who know gays and lesbians are not the tormented, perverted, evil people portrayed by this minority group.

Would you like to do something about this?
WHO WILL DARE TO BE AUSTRALIA’S PHILIP YANCEY?
Philip Yancey is a writer and editor-at-large of Christianity Today. His books have sold millions, been on the Top Seller’s list and earned him many awards. His book, “What’s so Amazing About Grace?”, caught the attention of Bono, who made contact with Yancey after reading that book.

Amazed by Grace: An Interview with author Philip Yancey
with Whosoever magazine editor, Candace Chellew Hodge
Whosoever: In your book “What’s so Amazing about Grace?” you tell about your friendship with Soulforce leader Mel White and your support of him at the March on Washington in 1987. Your description of your friendship with him and your feelings toward the gays and lesbians you met at the march was probably the most grace-filled writing I’ve ever read from an Evangelical Christian. What is your position on gays and lesbians in the church?

Yancey: You don’t beat around the bush, do you? Mel was one of my closest friends for years before he revealed to me his sexual orientation. (He still is, by the way.) He had repressed and hidden his homosexuality, and in fact was married and was making a fine career in Christian publishing and ministry. Mel became a window to me into a world I knew nothing about. He tells his own story in the book “Stranger at the Gate.” Readers of your magazine know well how explosive this issue can be. I get hate letters full of equal venom from both sides: from conservative Christians appalled that I would maintain a friendship with Mel and write compassionately about gays and lesbians, and from the other side wishing I would go further with a full endorsement.
On an issue like that, I try to start with what I’m absolutely sure of, and work outwards. I’m sure of what my own attitude should be toward gays and lesbians: I should show love and grace. As one person told me, “Christians get very angry toward other Christians who sin differently than they do.” When people ask me how I can possibly stay friends with a sinner like Mel, I respond by asking how Mel can possibly stay friends with a sinner like me. Even if I conclude that all homosexual behavior is wrong, as many conservative Christians do, I’m still compelled to respond with love.
Obviously, if a church is saying you need to give up sexual orientation, that church needs some education.” Phillip Yancey 2004
Read “What’s so Amazing about Grace?” extract here
The Religion Report -Radio National

Listen Now – 20022008 |Download Audio – 20022008
Baptist pastor Mike Hercock is married with a wife and two kids. His church is a wine-bar in inner-Sydney Surry Hills. And he’s marching in this year’s gay and lesbian Mardi-Gras Parade- one of 40 Christian ministers apologising for the church’s past and present treatment of gay people, and running a real risk of retaliation for doing so.

Sunday Nights with John ClearyFirst Hour: Should Christian pastors be apologising to the Gay and Lesbian community?
24/02/2008