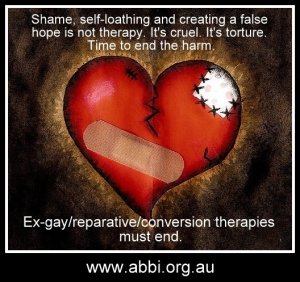 Ex-gay/reparative/conversion therapy ministries credibility around the world is being substantially challenged as an increasing number of people come out with their stories saying – it just doesn’t work. In fact, reparative/conversion therapy causes harm that can take years to overcome.For some time I’ve been collecting testimonials from men and women who have gone through these programs and also former leaders. After the apologies of 3 former ex-gay leaders at the Ex-gay Survivors Conference in Los Angeles (organised by Soulforce and beyondexgay.com, I thought it was time to release some of the statements.
Why has it taken so long for people like these leaders and myself to speak up?

From the 100’s of emails I’ve received and people I’ve met, I think it’s obvious why only now people are finding the courage to speak up.

1. When people leave ex-gay programs they are not empowered but feel defeated and often live with a sense of failure and shame. It takes time to feel good about yourself again.

2. The experience of spending years trying unsuccessfully to become heterosexual can leave a person traumatised. For many, to go back to these experiences reminds them of the pain of some of the darkest days of their lives. Some would just rather move on. It takes time to heal. Some may never.

3. Resolving the issue of the perceived conflict between your sexual orientation and your faith have often gone on for many years and after leaving the ex-gay world/teachings/philosophy can still take years to sort out. Some never do. The conditioning is deep and subconscious.

4. It’s only been the last decade that mental health professions have taken time to research and see if there is any scientific evidence to back up ex-gay claims. None has been found. Australian Psychology Association , American Psychiatric Association.

5. Claims have been made by Exodus and other groups that 1,000’s of people had become heterosexual and got married to prove it. History tells us that this is only a change in behaviour and not orientation and that’s why these marriages have not stood the test of time. I have a folder full of stories like mine. 12, 16, 20 even over 30 years married. Then having to admit, in essence, nothing really changed, leaving wives feeling betrayed and children hurt.

6. In Australia, ex-gay survivors and former leaders were all in isolation thinking we were the only ones, but ‘A Life of Unlearning’ has not only changed individual lives it’s brought people together. There is now a growing network of people who are committed to ensuring that the others don’t waste years trying to do the impossible. I.e. Change from being gay to straight.

Read each statement below and hopefully it will be give those seeking deliverance from their “unwanted same-sex-attraction” a more realistic picture so that they may devote their time and effort to a genuine healing of self.

I issue an appeal to Australian ex-gay/reparative/conversion therapy ministries. If you are professionally qualified to work in the areas of sexual addiction and sexual abuse, then continue that important work. But to have any integrity you should also let your clients know that 1,000’s of us have found peace, freedom and resolution by loving our gay and lesbian selves instead of rejecting, suppressing and denying who we are. The invitation is always open for an informed and respectful dialogue. Thank you also to the current ex-gay leaders who have honestly acknowledged that the gay thoughts and feelings have not gone away and never will.

I’d like to honour all the people below for their courage and honesty. I know this will help ensure fewer people will be harmed and not waste years of their lives heading down a dead end track. And of course it will literally save lives.

As more former ex-gay leaders have come out and are willing to tell their stories I have added their statements also to this blog: