Around the World in 18 Days Ex-gay Survivors Conference….and more

Around the World in 18 Days Ex-gay Survivors Conference….and more

Around the World in 18 Days…….or how to give yourself a severe case of jetlag
Irvine CA for the first Ex-gay Survivors Conference for 4 days. Long Beach CA for 2 days to meet with people I connected with on the internet back in 1998 and also spend time with Ps Sandy Turnbull and her partner of 21 years, Janet, who pastor a Pentecostal Church (Glory Tabernacle) in Southern California.
Then on to Washington for a day to meet up with the Religion/Faith and Coming Out Departments of the Human Rights Campaign.
London for 6 days to speak at Courage and run a diversity workshop with the management team of the Kingston/Wimbledon YMCA., speak at ‘An Intimate Evening with Anthony’, near the Houses of Parliament. …..then on to Bangkok for 4 days on the way home. 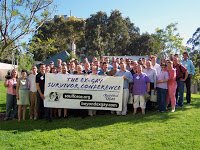 The conference was organised by Peterson Tuscano and Christine Bakke (Beyond Exgay ) and Mel White’s organisation Soulforce (The purpose of Soulforce is freedom for lesbian, gay, bisexual, and transgender people from religious and political oppression through the practice of relentless non-violent resistance.)

The conference was held at the same time and same suburb as the umbrella organisation of global ex-gay ministries Exodus’ ‘Freedom Conference’ in order to present another voice and counteract the ex-gay ministries false and outdated assumptions that homosexuality is the result of sexual trauma or a dysfunctional upbringing and that people can actually change their sexual orientation. Only days before the conference, Exodus President Alan Chambers admitted in an interview with the Los Angeles Times there is actually no such thing as an genuine ex-gay. Things got underway with a press conference where several former leaders of Exodus apologised publicly for the hurt and damage they had caused individuals whilst they worked with the organisation. (watch press conference here)

It was fantastic to finally meet up with many people I’ve been in contact with over the years through the internet. Wayne Besen (author of Anything but Straight ) Mel White, Jeff Lutes and Bill Carpenter from Soulforce, Jim Burroway ( Box Turtle Bulletin ), Mike Airhart (The Exgay Watch ) and Jallen Rix. 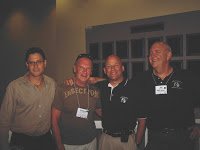 The conference was a great success and will have many positive ongoing repercussions………and a special thanks to everyone who donated to make this possible. And that means the person who donated $10 through to the person who gave $2,500. The generous response was quite humbling and encouraging to know that so many people see the importance of and believe in the work I’m endeavouring to do.

Look out for a special announcement about ex-gay ministries in Australia in the next week.

Other highlights of the conference were Peterson Tuscano’s humorous yet profound one man performance of “Doin’ Time in the Homo No Mo Halfway House–How I Survived the Ex-Gay Movement!”. Peterson wasted literally $1,000’s in exgay programs being told and believing they would be able to make him straight. And a concert by gay Christian singing couple, Jason and DeMarco. Watch Jason & De Marco at New York Pride

Do you believe in divine appointments or synchronicity?

Knowing I was going to spend a few days in the UK I thought it would be good to connect with Jeremy Marks. I mention Jeremy in ‘A Life of Unlearning’ as he used to be on the board of Exodus and ran an ex-gay ministry in the UK called Courage. In 2000, they realised that they were doing more harm than good and decided that Courage should be affirming of gays and lesbians instead of trying to change them. I sent an email to Jeremy the day I left for LA saying I’d like to catch up with him in London. The first night I was in LA I discovered that my room mate for the night Marc, had actually just come back from dinner with Jeremy. Jeremy was on the same floor of the hotel I was staying at.
Seven billion people in the world and I happen to end up in the same hotel in another country with the person I want to meet. How does that work? I spoke at the Courage group in London a week later and have developed a great connection with the Jeremy.

Above: Marc from Texas, Jeremy Marks(centre) and Paige from Soulforce.

Above: Film Maker, Lisa Darden discussing her next movie after interviewing me for the film ‘For Such a Time as This’.

Above: Michael Bussee. One of the original founders of Exodus

Snippets of the conference

The Human Rights Campaign is America’s largest civil rights organization working to achieve gay, lesbian, bisexual and transgender equality. By inspiring and engaging all Americans, HRC strives to end discrimination against GLBT citizens and realize a nation that achieves fundamental fairness and equality for all.

I’d prearranged to meet with the heads of the Religion/Faith and Coming Out Departments. Staying in the hotel opposite, I was amazed to discover that the headquarters in Washington is a 5-story building  with a staff of 140 including interns. What an amazing commitment to equality of GLBT people in that country.

More information about the work of the HRC and outcomes of our meetings later.