An open invitation to Peter Stokes from the Salt Shakers

An open invitation to Peter Stokes from the Salt Shakers 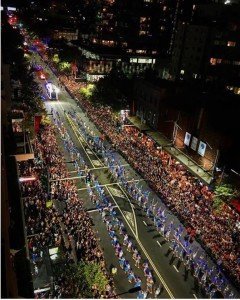 Letter from Peter Stokes, a Christian activist and Executive Officer of the Salt Shakers sent to the Sydney Gay Press SX  and published 14 March 2005. And below that a response from Anthony Venn-Brown published 24 March 2005.

IT DOESN’T ADD UP

When are your people going to wake up to the FACT that 450,000 people simply won’t fit in Oxford and Flinders Streets?

At 1.500 metres long and about 35 metres wide, that’s 52,500 sq metres. At a VERY tight six people per sq metre there is only room for 315,000 people, and NOWHERE for the parade. Taking out 12 metres for the parade removes 108,000 people and leaves space for just 207,000 people. Yes, there are some on balconies and roofs but they would not represent more than a few thousand people. BUT everyone knows that all the vacant space is NOT filled with people and they are certainly not six per sq metre.

There are in fact, according to Adam Carr and our own photos, ONLY about five to ten rows of people in most places. The real crowd size is therefore actually closer to 50-60,000 – but what is a extra 0 to people who constantly exaggerate their community size to get attention, and in the case of Mardi Gras, to get money from government and business!

AN OPEN INVITATION TO PETER STOKES

Thanks for your letter (It doesn’t add up) to SX regarding the numbers quoted about the Mardi Gras parade.

You’ve obviously gone to a lot of trouble to ensure that the wrong impression is not given. I know that it’s really important to you that the GLBT community is seen as a very small section of the population and therefore are less important than heterosexuals. We know that minorities will never be valued like the majority and it’s important to keep them in their place. I can see how important it is to also challenge the numbers watching the parade as 450,000 because it may indicate that many people in Australian society have moved past their prejudices, have a greater understanding sexual orientation and celebrate diversity, not heterosexism.

I have an invitation for you Peter. I want to become your friend. I’m sure that won’t be a problem to you as a committed follower of Jesus Christ and that you would never behave like the Pharisees of Jesus’ day that refused to mix with certain groups as they were considered unclean. Aren’t we glad that Jesus showed us a new way of love……and became a friend to publicans, prostitutes, sinners and tax collectors (the despised people of that society). Jesus’ parable of the shepherd who left the 99 sheep to seek out the one lost is a wonderful lesson of love. It’s strange, isn’t it, how the religious leaders of the day had become so self righteous and evil. I’m sorry, it may appear like I’m giving you a bible lesson, forgive me, you would already know this as you are a dedicated student of the bible.

When we become friends then you can come into my world and find all those terrible people who are predators, live a decadent ‘homosexual lifestyle’ and want to adopt children and convert them to homosexuality. This close contact would help you in your research so it could be based on real fact instead of just a perception.

From your letter I see how clever you are with numbers and that statistics are important to you. As my new found friend….will you please help me with the research I’m doing. I know that human life is sacred to you because of your strong stand against abortion and euthanasia so you can help me get the statistics on those who suicide in churches because they are gay. So far I’ve found that in one church in your home town of Melbourne, three guys suicided in the space of two years because they couldn’t change their sexual orientation. As you have such a network of churches could you send out a survey to the pastors and help me get these figures. One problem we may have though is that most pastors would be unwilling to admit that members of their congregations take their own lives and also some families are too ashamed to admit their child killed themselves because they were gay. It’s such a shamefully dark secret.

I’ve also tried to count the number of prayers I prayed to God to change my sexual orientation. That might seem like an easy task as I prayed every day for 22 years which totals 8,030. The difficulty I’m having here is that some days I prayed more than once…..especially when I was tempted or after I’d ‘fallen back into sin’. Those were days when I prayed over and over again asking for forgiveness and help.

I don’t think we’ll have to work on the statistics of violence, hate crimes and even murder of gays and lesbians because others have worked on those figures. In 1998 when the religious right launched a campaign against homosexuality there was a reported increase in all these figures culminating in the murder of Matthew Shephard in Wyoming USA. If you become my friend though, you could walk me home at night and protect me from any attacks. Or maybe you would prefer to stand by and count the punches I receive when straight guys think its fun to bash a poofter. The last time it happened I ended up with three…. or was it four broken ribs. I’ll get the right figure from my doctor. He has reliable records. I don’t know where those guys got the idea that they should bash me. I wasn’t doing anything to them in fact I tried to walk on the other side of the street. I’ve often wondered if the churches refusal to accept homosexuals is related to this lack of tolerance but maybe I’m wrong. Maybe it was my white jeans and tight shirt that made them think I was a queer. Could you help me go through my wardrobe and tell me which clothes identify me as homosexual so this won’t happen again?

Another area we could work on together is to get figures on exactly how many men and woman have genuinely changed their sexual orientation to heterosexual. I’m afraid we have another problem here. The exgay ministries and Christian counsellors don’t keep records of their success rate. Some have claimed a 95% success rate while others say its 10%. Exodus International has been operating now for three decades, even though the founders Michael Buse and Gary Cooper admitted it was a farce, after falling in love with each other. Getting married it seems can’t be classed as a success…….16 years of marriage didn’t change me. Of course some of my behaviours changed but not my sexual orientation. While we are looking at the exgay ministries we should also work on how much it costs to convert from homosexuality to heterosexuality. Some Christian ministries and exgay groups have kept people in therapy for years, promising that if they don’t give up, eventually they will be healed of their sickness and become acceptable to God. Considering that there is such a low success rate, the cost of conversion of one homosexual must be running now in the millions of dollars. It’s an obviously profitable business for some.

Finally I want you to help me get figures on how many gays and lesbians are living the ‘homosexual lifestyle’. There is also a problem for me here. How do I define the ‘homosexual lifestyle’? If we define it as going to clubs and bars, taking drugs and being promiscuous, how can I really tell the difference when many heterosexuals do the same thing. I’m already underway with this research and feel that about 95% of the gay community don’t live the ‘homosexual lifestyle’. But I have another problem. The problem is that it’s really really difficult to identify them……they appear so ‘normal’. They live in the suburbs and have been in relationships for years and never go to Oxford Street. They live and act just like their heterosexual neighbours. Even some are parents. I think the only way we can really tell is if we go into the bedroom and watch if they have sex together. I’m a little uncomfortable about this though as I feel that I shouldn’t invade such a personal and private part of their life.

I’m keeping the figures of the hundreds of emails I’m getting from readers of my autobiography so you won’t have to worry about that. You may like to read them though as they talk about the torment and humiliation they have experienced as a result of pastors and church members being totally ill informed about sexuality. It seems that most of them have suffered mental and emotional abuse from the way they were treated.

I’m sure our friendship will be mutually beneficial and challenging for us both. Your website states you believe Christians should ‘love the sinner but hate the sin’. I’m giving you the opportunity to let all of Australia know you practice what you preach. You can only love me by getting close to me. The gay community has never experienced that love but only heard words of condemnation and judgement of their ‘sin’. Just in case you’re wondering about my faith. I still believe in a God who does miracles. The miracle is that I am still alive and that I’m sane. You can contact me any time. You have my email address.

Yours in Christian love